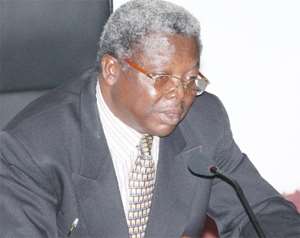 The Commission had asked for the judgement but the GNPC could not produce it at the Commission's sitting Monday, but Justice Apau suggested that since the Corporation was a party to the case, it could apply for a copy of the judgement.

Adwoa Afriyie Wiafe, Principal Legal Officer representing the Chief Executive officer of GNPC, told the Commission that at certain stage of the case the Attorney-General took over and the corporation was informed of the conclusions of the judgement.

But, Justice Apau insisted the corporation was a party to the issue and, therefore, could apply for the judgement together with the proceedings and give the commission a copy.

Ms Wiafe assured the Commission that the request would be honoured but could not give specific time-frame for the submission of the judgement.

A London High Court of Justice in the United Kingdom (UK) ruled that GNPC (Ghana government) should pay $40 million, together with interest and costs totaling $7 million to Societe General.

The Bank of Ghana was also billed to produce to the commission the official exchange rates of the major currencies against the Ghana cedi from January 1991 to January 2014. The bank, through its representative, Mr Yao Agbelenko Abalo duly submitted it.

Mr Victor Gborglah, Partner of Ernest and Young, had also been requested by the commission to submit audit and management reports in connection with Construction Pioneers (CP).

The Lands Commission, represented by Justice M.M. Morgan, Chief Valuer, also told the commission his outfit was not aware of land compensation made on the Volta River Authority resettlement area.