FATHERS’ DAY, A MARK OF MASCULINE SHAME OR REAL ACHIEVEMENTS? 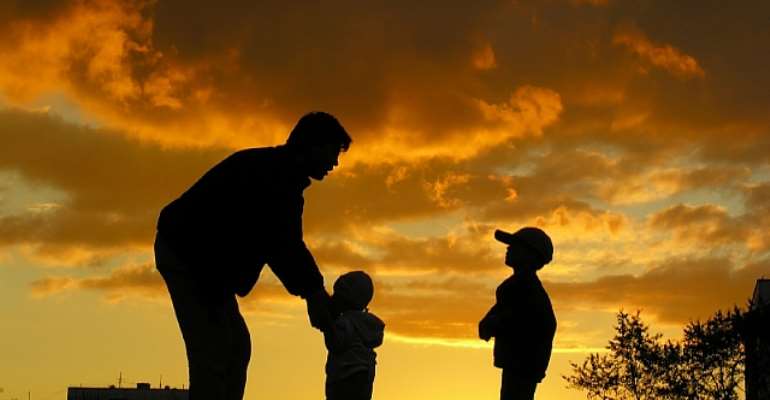 Unlike mothers' day, surrounded by months of euphoria and ceaseless flow of media sensations with spectacular events in honor of mothers, the annual celebration of fathers' day is usually characterized by silence which keeps me wondering if fathers are worth celebrating at all. Well to my utmost surprise, I found a handful of real men whose hard work and beaming dedication as distinguished fathers cannot go unnoticed; as shining examples to their household and beyond, these are men who brave the odds to protect their families and have equally won the admiration of all. Others have raised the bar of discipline, set the parameters for a good home, instill timeless values, and similarly nurtured their children to greater heights.

Undoubtedly, they stand tall as cradle of blessings to those and many who come their way to fetch invaluable and rich experiences on marital, corporate, religious and social matters. Such men are much obliged not only to their biological children but every single individual who is young enough to be their sons & daughters and will never ask for illicit sexual favors when young girls knock on their doors for help. Indeed, it's very challenging to locate such men in our Ghanaian society, but the nagging truth is, there are very few fathers with such amazing footprints worthy to celebrate and may God richly bless them.

However, the loss of media hysteria and social excitements about fathers' day underscore a startling reality- responsible fatherhood has eluded many homes in Ghana. Quite ironic there are countless number of so called fathers who have horribly made life unbearable for mothers, children and families alike, hence the prominence in celebrating fathers has rather paled into obscurity. For many, the celebration of fathers' day is a shameful endorsement of neglect, mediocrity and irresponsibility, all because, thoughts about their own fathers, obviously come with gory images of questionable attitudes and behaviors which are far becoming the norm. Majority of us have had to bear the brunt of such indecent behaviors of our fathers at varying degrees, namely, lack of proper maintenance of homes; physical and emotional torture on mothers; shirking financial duties especially the payment of school fees; open display of promiscuous lifestyle; spousal killings, reckless family procreation with multiple partners and outright disregard for their dignity; physical abuse of children; lack of spiritual and social support for the family; and a litany of others.

Broken home, an upshot of this ugly spectacle then opens a Pandora box of deep seated problems for both mothers and children. With the former being the biggest victim, women almost always stand at the bashing ends of marital debacles and are therefore made to solely face the consequences thereof. Without any social rehabilitation/intervention, single mothers are painfully trapped by the scourge of poverty, social exclusion, stress, low sexual drive, and some regrettably have met their untimely death. Nearly lost in the import of marriage and self-esteem, others have sworn (with all the energy in them) not to marry again.

In cases where affected children are in their formative stages, they are exposed to mental traumas & emotional disorders, economic hardships, social disorders, and physical deficiencies in growth. And to even relate practically from memory lane, for every 5 friends that I made at age 12, 4 of them were victims of broken homes which were highly attributed to irresponsible fatherhood. Hence it's very common for children to live intermittently with their grannies, uncles, aunties, step mothers etc., for instance at a tender age of 5, a boy stays with is uncle for 3 years, then with his aunty for the next 5 years, back to his granny for a year and the cycle continues until he becomes an adult.

In most cases children who are familiar with this upbringing are ill-treated, denied parental love, and exposed to all sort of questionable behaviors and values inimical to their moral and physical growth. Dreams about a brighter future forever remain a delusion as the clouds of negative thoughts always surround their virgin minds. Luckily some children are able to achieve their goals in life, but for several others, the quest for a better living becomes a perpetual struggle on the streets. Ultimately, the pursuit of happiness by these children mostly in the urban areas tells a long and disturbing tales of child labor, street children, juvenile delinquency, teenage pregnancy, child trafficking, child prostitution etc.

With unwavering determination to patch the broken pot, mothers in such devastation have single handedly work themselves to incredible achievements which are far beyond description. The Ghanaian society readily abounds with successful stories of mothers (single parents) who play additional role of fathers. Neglected mothers usually traders, fishmongers, market and professional women work at irregular hours to put their families in good shape, thereby leaving their husbands who have sworn to shirk responsibilities to their own fate. In all desperation, there are countless stories about mothers who starve themselves and others who go the extra mile to trade their cherished assets including precious jewelries, expensive cloth, vast acres of land, and other classy belongings for peanuts in order to guarantee a brighter future for their children whose fathers are largely on the run. And why not, it's these triumphant stories about women that amply sum up to place the celebration of mothers in a perfect picture. Thankfully, the touching stories of mothers have inspired many including musicians to compose fantastic songs to honor them. Interwoven with edifying lyrics and intriguing melodies, these popular songs enjoy massive airplay on mothers' day, and are proudly sung into the stubborn ears of many fathers. Therefore with all certainty, if one points to a successful and well-endowed home, I will so speak of a powerful mother who made it happen.

Not to sound too dismissive on our fathers, (for I am well aware of the challenges and vicissitudes associated with the role of a functional father in this trying moment), essentially this is to inspire the nation's young and prospective fathers to truly stand the task of being responsible fathers worthy of emulation.

It should be a source of apprehension to observe that, quite a number of young folks are trudging the very path that had spelt disaster for our fathers and numerous families in yesteryears. Frightening enough, some have taking a lead in alcoholism, drug abuse, unhealthy and promiscuous lifestyle, and would probably not return. But, readers would possibly agree that there is more to being a father than merely reproducing children without any considerable attention whatsoever to their upbringing.

Retrospectively, the most influential lesson of the horrible past for every young man, is to depart from attitudes that have ruined many dreams and shattered albeit promising lives of countless number of children. We must truly take the position as heads of our family and augment the role of our lovely wives. In all sincerity, young and prospective fathers must treat the institution of marriage with its deserving reverence and accordingly view the concept of family procreation from a more responsible posture. Perhaps, at puberty, young adults must be stirred to a sobering realization that, it's not enough to sow seeds of human life (spermatozoa) in quick and repeated sessions of reckless ecstasy.

Well, to my 'adventurous' friends, this is something to chew on; before we lose that jeans trousers for a thrilling intercourse, just be mindful that, beyond the passionate intensity of countless orgasms, the wellbeing of our own children eminently awaits our responsibilities as fathers and husbands.

Until we arrive at such a mental appreciation and act purposively in that direction as fathers and husbands, the present and future generations will awfully taint fathers as most heartless creatures by God, hence, the consummate efforts of our gracious mothers will forever outdo the toiling sweats on the million faces of fathers across the world, to be a man is not easy!

Bishop Dag apologises to Otumfuo over 'offensive' sermon
11 minutes ago

There's power in a father's encouragement – Pastor Otabil
11 minutes ago