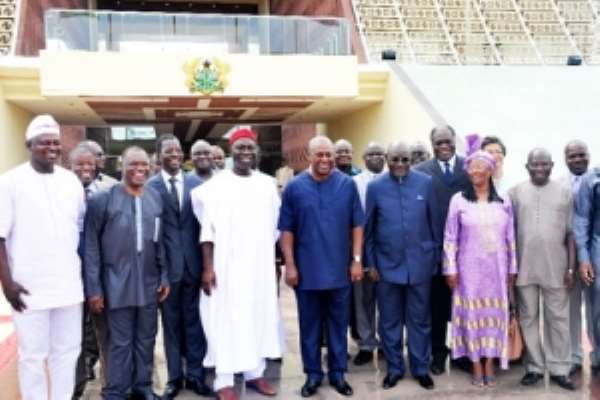 President John Dramani Mahama has given the strongest indication yet about Ghana's resolve to support negotiations that will lead to the signing of the Economic Partnership Agreement (EPA) with the European Union (EU).

He, however, said the country would want the negotiation to take place at the sub-regional level, not unilaterally.

Receiving a delegation of the ECOWAS Parliament at the Flagstaff House yesterday, the President said, “Ghana will continue to play a facilitating role in the signing of the EPA,  especially now that we have assumed the chairmanship of ECOWAS.”

President Mahama said it was much better for countries in the sub-region to negotiate the EPA as a body, adding, “It will be disastrous if we go unilaterally.”

He said ECOWAS could count on the sub-regional Parliament in reaching a favourable agreement with the EU on the EPA.

Integration
President Mahama noted with concern that in spite of the signing of protocols on the free movement of goods and people, the peoples of West Africa were still encountering difficulties crossing from one country to another.

He mentioned illegal road checks and multiple border crossings as some of the difficulties.

The initiative provides that customs and immigration officials of neighbouring countries will be at one common border point and do their checks on persons crossing, instead of the current individualistic checks at the border posts.

Mr Mahama said already the process to implement the system from Nigeria through Benin, Togo and Ghana to Cote d'Ivoire had begun.

Illegal checkpoints
“We should also  come into agreement with the other checks done by the security services.

Often many of the security people erect illegal road checks and harass citizens going about their legitimate businesses,” the ECOWAS Chairman stated.

To address that problem, he suggested that sister countries reach a consensus on where security checkpoints should be located.

Democracy and security
President Mahama said he wanted to work at strengthening democracy in the sub-region and also tackle issues relating to security.

“We want democracy to be strongly rooted in West Africa,” he said, and added that next year five West Africa nations would be holding presidential elections which, hopefully, would pass peacefully.

He also said Ghana would support Nigeria in dealing with the Boko Haram threat.

He said the greatest challenge confronting West Africa today was terrorism and assured the President that “it is a challenge we hope to support you  to tackle”.

He also appealed to the regional body to seriously look at addressing youth unemployment, which was becoming a canker.

Present was the Speaker of Ghana's Parliament, Mr Edward Doe-Adjaho.