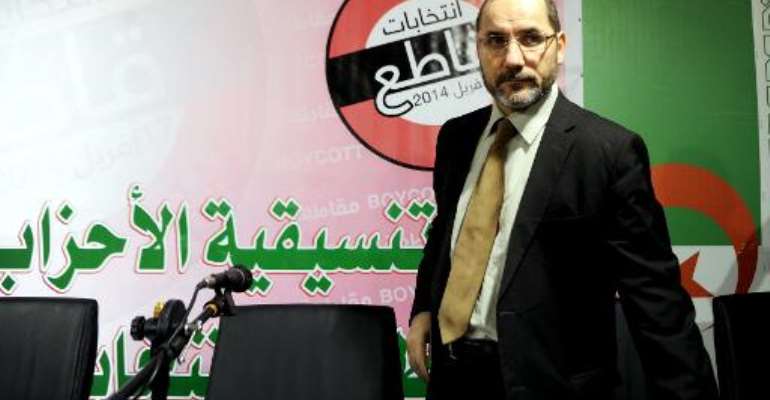 The president of the Movement for the Society of Peace (MSP), the Algerian branch of the Muslim Brotherhood, Abderrezak Mokri arrives for a press conference on April 11, 2014 in the capital Algiers. By Farouk Batiche (AFP)

Algiers (AFP) - Algeria's Islamists -- once the country's leading political force -- are boycotting this month's presidential election, chastened by recent poor performances at the polls and setbacks for ideological soulmates across North Africa.

The three main moderate Islamist parties have forged an unlikely alliance with the fiercely secularist Rally for Culture and Democracy to call on voters to shun an election they say is a "sham".

Such considerations have not prevented some of them from taking part in past elections and even backing President Abdelaziz Bouteflika, the ailing 77-year-old incumbent whose bid for a fourth term they are now united in opposing.

Analysts say the decision of all three parties to boycott this time reflects a common fear of rejection at the polls as Islamist groups suffer reverses across the region.

The April 17 leadership contest comes just months after the resignation of an Islamist-led government in neighbouring Tunisia and the Egyptian army's ouster of Islamist president Mohamed Morsi last year and its blacklisting of his Muslim Brotherhood as a terrorist group.

"The Algerian Islamist parties are losing momentum after the failure of political Islam in the Arab Spring countries," said analyst Said Djabelkheir.

A resurgence of jihadist violence, brought home to Algerian voters by a deadly hostage-taking at the In Amenas gas plant in the southern desert in January last year, has also revived dark memories of the civil war of the 1990s.

A rival, more radical Islamist movement, the Islamic Salvation Front (FIS), had been poised to win a parliamentary election in 1991 when the army stepped in to cancel it, prompting many of its activists to take up arms.

The traumatic experience of the "black decade" in which an estimated 200,000 people were killed is never far from the minds of Algerians and has forced the moderate Islamists to negotiate a difficult balancing act ever since.

Differences over whether to work with the regime have left them fragmented and weakened, their dismal performance in a 2012 general election contrasting sharply with electoral victories for Islamists in Egypt, Tunisia and Morocco.

The Movement for the Society of Peace (MSP) -- the Algerian branch of the Muslim Brotherhood -- supported Bouteflika from when he first took power in 1999 right up to early 2012, backing him when he was last re-elected in 2009, and served in successive governments.

But the MSP's decision to break with the regime cost both it and its newfound Islamist opposition allies in the Front for Justice and Development (FJD) and Ennahda dearly.

The MSP had been the third largest party in parliament, but the parties' joint list took just 48 seats out of 462 in the 2012 election.

Dalia Ghanem-Yazbeck, an analyst at the Carnegie Middle East Centre, said the decision to boycott was probably "an excuse to avoid yet another setback."

"It fails to hide the fragmentation, divisions, and lack of leadership within the current Islamist movement as a whole. Their inability to formulate a clear strategy, as a movement or as individual parties, has cost them support on the ground," she argued.

For Amel Boubekeur, a specialist in political Islam at the Jacques Berque centre in Rabat, the rollercoaster of the past few years as the hopes of the Arab Spring uprisings have receded has changed Islamists across North Africa, who no longer think in terms of power as an exclusive goal.

But she agrees that they lack a political programme.

Forced "to take other players in the political arena into account," Algeria's Islamists have struggled to find common ground or to rally behind a consensus presidential candidate, she said.