The Identities Of The 100 Uniform Clad “Fulani Herdsmen” Marauders 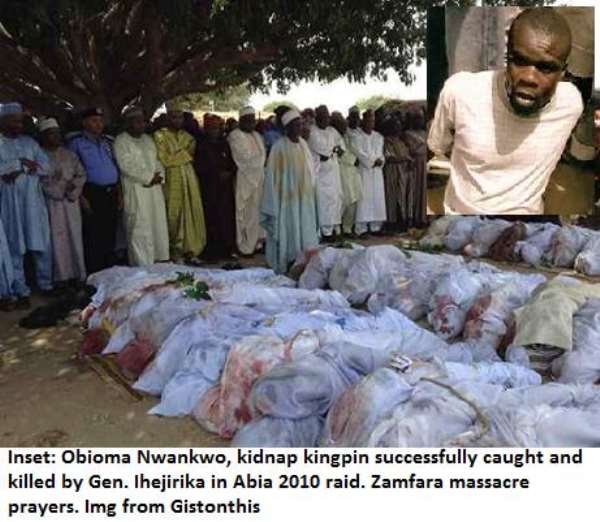 The identities of the 100 or so-known, "Fulani gunmen" who have been massacring various towns in the north, clad in military fatigues and supported by helicopters has been exposed.

The leaders include: Buhari (not the ex-president), Kundu and Munjagara. These men have their terror dynasty settlements in known areas, that is—known by the locals and the security services, and have been terrorizing communities with full impunity for years.

In this recent April large scale attack; over 2000 community members from the various affected sates gathered at Yargaladima village of Dansadau Emirate, Maru Local Government Area of Zamfara State to discuss their security options. During the meeting they were attacked on by the armed bandits who knew about their gathering.

According to Alhaji Amadu, the village head of 'Yar Galadima, who made the revelation in WeeklyTrust, these members have been levying the villagers, collecting taxes of up to N80, 000 routinely. The organized terrorists have also been abducting girls for sex, sending them back with some money for their upkeep after they've gotten pregnant.

His words:
“The government knows them. They know their leaders like Buhari (not the ex-president), Kundu and Munjagara. They were arrested many times but released. They have established their dynasties where they rule like traditional title-holders. The government knows that, they should therefore deal with them.”

The treacherously betraying part of his exposition, which he said he was making now because with so many were killed, he is no longer afraid, is that these murderers have been arrested by state security services several times and been released again. According to the report, many other villagers said they believed strongly of a link between the criminals and the government.

On the openly known operation and locations of these marauders who operate “dynasties of terror,” a resident further stated in the Trust report:

“For example, we have some dynasties like that of Gidan Sarkin Fulani Mai Kudi, Hannu Tara, Dutsen Baika, Na Alhaji Shehu, Rabe Sarki, among others. They're dangerous, but they can be crushed.”

Like our corrupt government officials in this era of demonic impunity, the murderous terrorists also enjoy impunity from our government to decimate our populations.

It is important to mention that many of these marauders are not Fulani or Muslims—by virtue of their lifestyle, raping and impregnating, etc, and speak foreign languages; they are mercenaries paid to do a job in Nigeria. These hired assassins should be viewed by the public as criminals; terrorist criminals enjoying the freedom of government support and immunity, and nothing more. There is no race, creed or sex that exclusively owns or is immune to terror and criminality. What caps crime in all societies is fear of God and functioning security services where there is justice and recompense for crime.

A similar account of criminals being released back to continue their terror was made by a valiant JTF commander in the Niger Delta, Maj-Gen. Emmanuel Atewe, two weeks ago when he arrested two Britons who attempted to bribe him with $66,500; the upright commander complained that one of the culprits acting in concert with the British oil thieves, Joshua Orupere was a repeat criminal who had been handed over to State security (EFCC) in the past, only to be released again.

This level of government betrayal is wicked, treacherous and evil beyond words. How can the people expose criminals and end the reign of terror in their communities, when they know the government will release them right back into society to come and slaughter them for aiding facilitating their arrest? This is a complete compromise of the security of the people and the integrity of the nation.

The Zamfara village head, Alhaji Adamu complained that his people were being wiped out systematically and determinately by this system, with those not killed, leaving in a mass exodus; exasperated, he said he has no more villagers to lead and with the farming crumbling along with the marauders stealing hundreds of livestock, all hope is lost.

The same predicament has befallen Benue state, Nasarawa and other parts of the North middle belt.

It can be recollected that in December of 2010, when kidnapper gangs were destroying Abia, the hometown of the ex-Chief of Army Staff, General Ihejirika, he organized a battalion of over 3000 troops in a mission that was so secretive, the soldiers did not even know what they were going for—thinking it was a training session, until they were given live rounds—to suddenly strike and smash the entire terror network. Kidnapper kingpin, Obioma Nwankwo was arrested and killed in that successful mission. This is the non 'kid-glove' approach, that the government has decided not to apply in the ravaged areas of the north and even the Niger Delta and other areas of the south where oil business vandalism and kidnapping has destroyed the ecosystem and fiber of society: impunity, romance and cooperation with criminals.

It is time we Nigerians ourselves, go after the terrorists and their supervisors. It is them or us. As desperation and betrayal compresses the communities, the Zamfara people have promised to personally revenge on these gangs, by themselves when next they dare attack, no longer waiting for the army. This is another Zamfara “Civilian JTF” in the formation as obtains in Borno. The reality as we the people keep needing to establish our Civilian forces to protect ourselves with mere clubs and knives, in the face of a useless government is that we are put in harm's way and society further breaks down irredeemably.

As a people we must collectively address the root of the problem—the compromised government at the head of the army and state security department, who no longer serve the needs and protect the lives of the people but rather aid and abet terror.

It is time for our collective and individual revolt against the devils in power and their cabal associates. It is time for the Nigerian Masses revolution! We either get rid of them or they continue to succeed in getting rid of us.

Come Out In Your Numbers And Vote Massively For NPP – Akufo-...
5 minutes ago