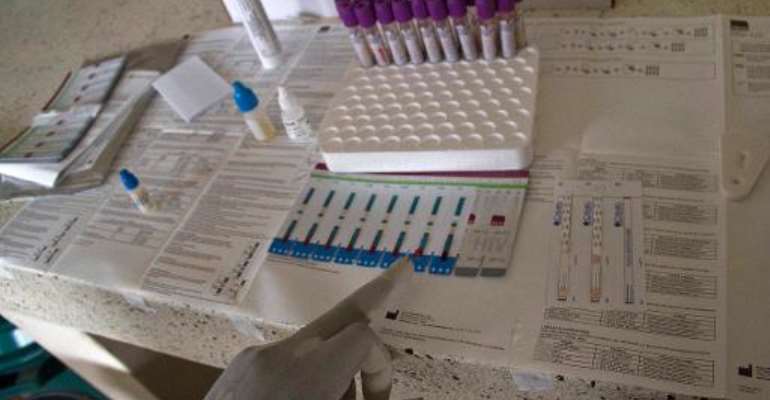 A photo taken on January 20, 2014 shows a lab technician testing a patients blood for HIV virus at an AIDS Information Centre in Kampala, Uganda. By Isaac Kasamani (AFP)

Quoting a police statement explaining the operation, the Daily Monitor newspaper said the Walter Reed Project, which provides treatment for people living with HIV/AIDS, had been "infiltrated" by officers and was found to be recruiting gays.

"Police deployed crime intelligence officers to verify the claims, by infiltrating the project. Two officers undertook the assignment and were registered for training by the NGO and found out that the trainees were being shown videos of men engaging in homosexual activity," the police statement said.

"The training targeted youth between the ages of 18 and 25. The trainees were shown videos of men engaging in homosexual activity, and... given literature describing safe sexual practice between males, as well as condoms and lubricants," it added.

The raid was the first such operation since Ugandan President Yoweri Museveni in February signed a bill that calls for "repeat homosexuals" to be jailed for life, outlaws the promotion of homosexuality and obliges people to denounce gays to the authorities.

The bill drew international condemnation, with US Secretary of State John Kerry likening it to anti-Semitic legislation in Nazi Germany.

The Walter Reed Project receives US funding and has expanded to treat other communicable diseases. A message posted on its website after the raid said it had suspended its activities after an employee was briefly detained.

There was no immediate reaction from the organisation to the latest report, although the Daily Monitor quoted a US embassy spokesperson in Kampala, which helps fund the project, as dismissing the police account as "fabrications".