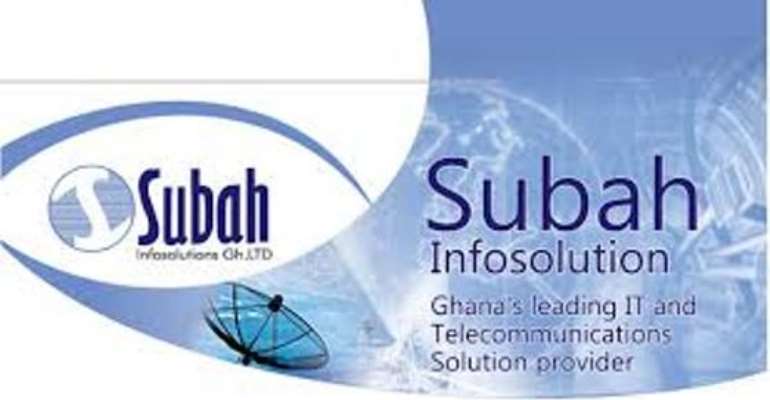 As Ghanaians seek answers to why Subah Infosolutions Limited was paid a whopping GHC75million between 2010 and 2012 to audit telcos but never did, the Ministry of Communications and the telecoms industry regulator, National Communications Authority (NCA) have completely distanced themselves from the murky saga.

Commissioner-General of Ghana Revenue Authority (GRA), George Blankson had earlier said Subah's appointment to audit the telcos for tax revenue assurance was with the recommendation of the NCA, but the NCA has refused to confirm or deny its involvement in the appointment of Subah.

Meanwhile, two of the top consultants of Subah are former NCA top directors – a former NCA Director-General and a former Director of Regulatory Administration.

The NCA has also directly denied a claim by the GRA boss that it (NCA) gave international call detail records (CDRs) to Subah to audit as a first step towards the physical audit of the telcos domestic billing systems.

GRA contracted Subah on behalf of the Ministries of Finance and of Communications. When it emerged that Subah had been paid almost GHC75milliion without any work done, President John Mahama ordered a suspension, investigation and review of the contract.

But while that investigation was ongoing, the GRA ordered telcos by a letter dated October 28, 2013 to allow Subah to install their auditing equipment on the telcos networks and carry out the electronic audit.

Information gathered from both Subah officials and telcos indicate Subah has signed non-disclosure contracts with at least four telcos and has moved its auditing equipment to the premises of those four.

The telcos and some industry watchers viewed that as a defiance of the presidential directive on the part of the organizations being investigated, GRA and Subah.

But Minister of Communications, Dr. Edward Omane Boamah recently distanced himself from the matter when he told Adom Business “what is going on between GRA, Subah and the telcos is completely operational so I cannot talk about it.”

He refused to answer why the two companies could be allowed to carry out an “operational” activity, which defies a president directive to “suspend the Subah contract and investigate the alleged wrongful payments.”

Meanwhile, the GRA's October 28, 2013 letter, threatened telcos to comply with Subah within 30 days of receiving the letter or face sanctions. But it has been more than six months since the directive and the audit has not begun yet.

Fresh information is, however, emerging that Subah, which has two former NCA officials as leading consultants, may have done some work for the NCA in the fight against SIM Box long before it was contracted by GRA to do the physical audit of telcos billing system for Communication Service Tax (CST) revenue assurance.

Again the NCA has refused to confirm whether Subah indeed provided service in the fight against SIM Box fraud. But an official of Subah has been bragging about that as one of the achievements of the company.

The NCA officials kept insisting “let Subah show you evidence of their claim then we can comment.”

What Subah has itself failed to explain is whether it indeed audited CDRs provided by the NCA, and if it did, whether it found that the telcos had defrauded the state to the tune of GHC555million, out of which it was paid the GHC75million as its 13.5% share of the incremental revenue it supposedly discovered.

An official of Subah could only manage a speculation that “it is possible that the telcos were hiding that much from the state”. But he was unable to say for a fact if Subah found that telcos hid that much, and if they did, which telcos were liable.

The Subah official also claimed that “Subah's work is like the police man – the government does not have to wait for the crime to be committed before arresting the criminals – we have provided a system that prevents the crime and that is something that is good for this country.”

He also noted that officials of some telcos have visited that Subah site at Roman Ridge Estates in Accra and they (the telco officials) were impressed with what they saw and had gained confidence in Subah.

But Adom Business gathered from all the six telcos in the country that Subah has not started any physical audit on any telco's billing system yet, partly because myjoyonline recently revealed that the mother company of Subah, The Jospong Group was negotiating to buy the sole CDMA player, Expresso.

The Expresso –Jospong deal fell through because the obvious conflict of interest was exposed, but the telcos needed further assurance that Jospong would not invest in the telecom business as an operator to compete with the very telcos its group member Subah is auditing.

An official of Jospong claimed it has signed separate agreement with each of the telcos and assured them the company would not go into telecom service provision. But officials of some telcos debunked that claim saying no such agreements had been signed yet, and that discussions were still ongoing.

Meanwhile, the committee set up by Ministries of Justice and of Finance to investigate the Subah saga, recently announced it had completed its work and submitted the report to the two ministries, but details of the findings are yet to be published.

Subah's own financial statement published by sections of the media indicates it doled out huge sums of moneys as 'gifts' to some unidenfiable individuals, and also  gave out loans to some government organizations, even though it is not officially registered as a finance company under the laws of Ghana.

The question still remains as to who received those huge 'financial gifts' from Subah, and whether those gifts are still not dictating the behaviour of officials who were supposed to have prevented Subah and GRA from defying a presidential order.