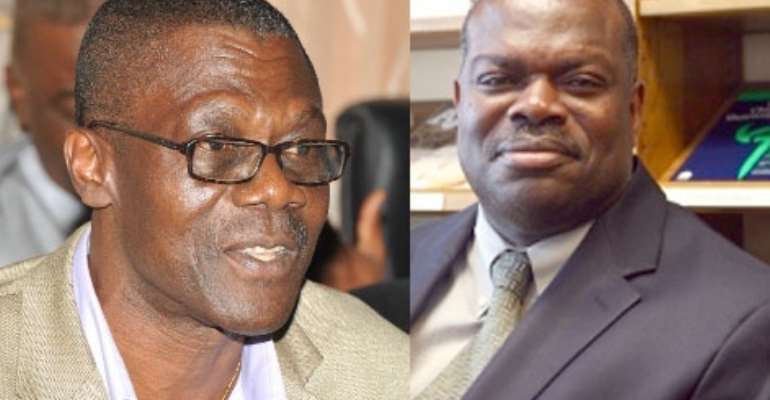 
The National Security Coordinator, Lt Colonel Larry Gbevlo-Lartey (rtd), has called the bluff of the authorities of the University of Ghana, virtually telling them to go to hell over the threat to haul him to court for his decision to dismantle the toll booth being constructed at the Legon campus of the university.

Mr. Gbevlo-Lartey says he is ready to meet the university in court over the toll booth brouhaha.

The Academic Board of the University of Ghana on Thursday told the Legon authorities to sue the National Security Coordinator for demolishing a toll booth in the early hours of Tuesday, in a Rambo style.

The action has generated furore, with groups and individuals asking the university to go to court.

The Academic Board, the second highest decision-making body of the institution, rose from an emergency meeting calling on the university to  go to court for redress over what it called unlawful demolition of the toll booth at the Okponglo end of the university.

The Board, after its meeting, directed its management to get its lawyers to sue the National Security Coordinator and his outfit for the unlawful demolition of the toll booth.

A 10-point statement was issued by the Board, in which the national security was condemned for its action.

However, Gbevlo-Lartey has indicated that he is unperturbed by the university's decision, and that he is ready to meet them in court.

Heavily armed policemen were said to have demolished the two structures around 1:30 am Tuesday morning under the instruction and supervision of the National Security Coordinator.

He later justified the action saying that the toll booth was wrongly sited and was nothing more than a public nuisance.

According to him, the collection of tolls at the Okponglo end of the university campus was creating unnecessary traffic to road users, and that the two uncompleted structures must make way for easy traffic movement.

The Academic Board of the university in a 10-point statement issued, condemned in no uncertain terms, the action by the National Security Coordinator.

“The Academic Board considers the actions of the National Security Coordinator and his team arbitrary, unconstitutional and unlawful, and a direct attack on academic freedom and national democracy,” the statement said.

The Board further described the action as a “major embarrassment to the freedom-loving people of Ghana.”

Lawless
Mr. Gbevlo-Lartey, a lawyer, was least worried by his action when he told Citi FM that the court would decide who is lawless.

According him, having tried in vain to make the university authorities see reason in not putting up the toll booth at the disputed area, he had no choice but to speak in the language they understood.

'Let's go to court and see who is lawless,' he fumed.

The National Security Chief said modern security threat goes beyond coup making, saying that it has shifted to communities on how to calm restless citizens.

He said people spend hours in traffic just because of the toll booth; and it was unacceptable.

He had rejected suggestions that he ought to have consulted the Vice Chancellor of the university, Prof. Ernest Aryeetey, before embarking on the demolition exercise.

He warned: 'The next time they put up another block there, we will go and remove it; that structure cannot be there.'