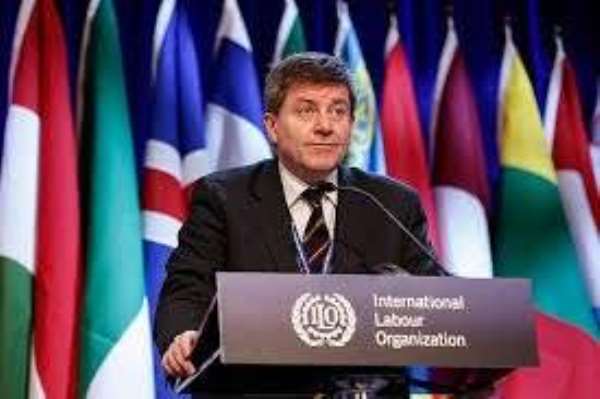 Accra, Feb. 19, GNA - As the world marks the Day of Social Justice which falls on February 20, International Labour Organization (ILO) Director-General Guy Ryder has urged policy-makers to converge on the ambition of a real global socio-economic recovery.

He said such a recovery for all - and a Post-2015 Development Agenda would help lift all out of poverty; declaring that 'Today, an entire generation of young people faced the prospect of a more uncertain, less prosperous future than did their parents. Many were already in desperate situations hardly able to fall any further.'

The ILO Director-General in a statement copied to the Ghana News Agency on Wednesday observed that 'this is a reality no policy maker can afford to ignore'.

He said even before the global financial crisis erupted in 2008, half of the world was living below the $ 2.00 a day poverty line, millions went hungry and too many had no prospect of securing a decent job.

'Six years of weak economic recovery and a faltering policy response have left millions more behind, without jobs and with less affordable food and services. As a result, we are faced with a deep social crisis, a crisis too of social justice,' he stated.

'Disturbing - and rising levels of inequality - in advanced and developing economies are widely acknowledged as cause for great concern. Today the wealth of the top one per cent of the global population equals that of the poorest 3.5 billion people. Are policy-makers ready to act?'

He said social protection measures are essential elements of the policy response, adding that 'countries with strong social security systems have reduced their poverty rates by more than half, through social transfers and have significantly reduced inequality'.

He said experience since 2008 had also shown that countries with such systems were able to respond more quickly and effectively to the crisis.

'Yet over 76 per cent of the world's population continues to live without adequate health and social protection coverage. And in the present environment, extension or maintenance of protection may meet with scepticism or be set aside for the future,' he said.

He said it was timely to recall those countries that historically had built sound economies and decent societies with social protection.

Mr Ryder said more recently, countries in a range of circumstances - from Brazil to Thailand and China to Mozambique had been making considerable efforts to make social protection an integral part of their development strategies.

He said these countries were showing that affordability could not be the excuse for inaction.

He said: 'In 2009, the ILO and UN launched the Social Protection Floor Initiative advocating social protection floors for all. Then, in June 2012 the International Labour Conference adopted the path-breaking ILO Recommendation Concerning National Floors of Social Protection (No. 202). It provides good guidance.'

The Director-General said "in the face of the social crisis - and the crisis of social justice, we urge policy-makers and policy making to converge on the vision and ambition of a real global socio-economic recovery - a recovery for all - and a Post-2015 Development Agenda that helps lift all out of poverty.

'There are options and the choice can be made to prioritize macroeconomic and fiscal policy decisions that promote inclusive growth with decent employment and social protection. This is the strong and sustainable foundation of social justice,' he said.