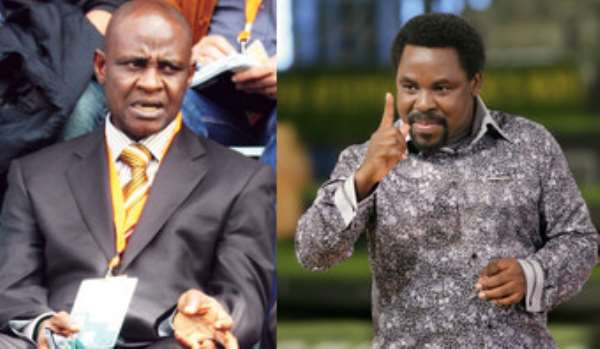 IT is not an overstatement that Nigerian football is presently enjoying the grace of God considering the surprise feats has recorded in the past few years, but the country's football authorities have a role to play if Nigeria at the senior level, can conquer the world.

And for the country to continue to enjoy the grace of God in the round leather game especially as the FIFA World Cup is fast approaching, football loving Nigerians have called on the football authorities to beckon on the 'Man in the Synagogue', Prophet Temitope Balogun Joshua, for the Super Eagles success at Brazil 2014.

T.B. Joshua as the 'Man in the Synagogue' is fondly called called, is the leader and founder of The Synagogue Church of All Nations (SCOAN),

The 'Man in the Synagogue' has been synonymous with the country's football in general and with some of the national teams' players in particular.

In 2009 T.B. Joshua stated a football club, My People FC, as part of efforts to help the youth. Two members of the team played for Nigeria's Golden Eaglets in the 2009 FIFIA U-17 Wold Cup.

Sani Emmanuel, who apparently lived in The SCOAN for several years, was Nigeria's top-scorer and the tournament's Most Valuable Player (MVP).

Following the 2010 Commonwealth Games in Delhi, India, T.B. Joshua rewarded the efforts of the Nigerian team, presenting the physically challenged medalists with cash gifts and cars.

Current World Boxing Organisation (WBO) International Light Middleweight boxing champion, King Davidson Emenogu, said that T.B. Joshua has financially supported him throughout his career and purportedly prophesied that he would be a world boxing champion.

The 'Man in the Synagogue' predicted that the country will not qualify for the 2012 African Nations Cup which was co-hosted by Equatorial Guinea and Gabon and it came to pasts when the star-studded Super Eagles could not soar past the Syli Nationale of Guinea.

The match ended in a 2-2 draw after the Guineans equalised to cancel Nigeria's 2-1 lead with seconds to the end of the match, thus Guinea automatically kicked Nigeria out having garnered 14 points as against Nigeria's 11 points.

But rather than blame themselves for their lack luster performance in the match, members of the team blamed other factors for their failure.

In a chat with reporters at the reception hall of the Transcorp Hilton shortly after the match, Osaze Odemwingie agreed that he did not play to expectations in the match but said the prediction of Prophet Joshua also put pressure on the team.

“Yes, I would say I'm sorry to Nigerians for not playing according to expectation and I believe I did not play well in the match. But the prediction of Prophet T.B. Joshua really affected us.

“We thought we could see him and see how he could overturn the negative prediction but the officials came with another prophet who prayed for us and told us that all was well.

“But in all we did not do our own bit of the job well as players and we are not happy that we won't play at the forthcoming Nations Cup.”

Speaking in same vein Samsunspor striker, Ekhigo Ehiosun, said the players were very much annoyed with themselves for not getting the ticket to the Nations Cup.

The ''Man in the Synagogue' again predicted that Nigeria will bounce back after the failure of the county to qualify for the 2012 Nations Cup. And true to his word, Nigeria qualified for the South Africa 2013 Nations Cup. The 'Man in the Synagogue' once again pronounced that Nigeria will beat Cote d'Ivoire in the quarterfinal stage against the fears of most Nigerians and the world in general, judging from the array of dreaded players in the Ivorian team which included Didier Drogba, Yaya Toure among others.

He did not stop at that, after his words came to past with the Super Eagles 2-1 victory over the Elephants of Cote d'Ivoire, the 'Man in the Synagogue' said Nigeria will proceed to win the Cup.

Top officials NFF after the match, conveyed their deep-rooted appreciation to the 'Man in the Synagogue', for what they described as his special support for the Super Eagles leading up to the 2-1 defeat of the hitherto dreaded star-studded Elephants of Cote d'Ivoire.

Apparently on cloud nine, NFF top brass and Coordinator of the Super Eagles, Emmanuel Atta, was lavish with encomiums on the 'Man in the Synagogue' for what he described as “his wonderful role in the 2-1 defeat of Cote d'Ivoire”.

Moments after the encounter, Attah sent out sms messages to the 'Man in the Synagogue' thanking him for standing solidly behind the Eagles in the game.

“We're very appreciative of him. He was wonderful and we can't thank him enough,” Attah screamed excitedly.

“He was fervent in his prayers for the team. We observed all that he asked us to do, starting from a day before the game. This is a special victory for the team and the nation and we cannot thank God enough.”

Attah also expressed gratitude to Nigerians for their support and prayers for the senior national team. He assured that with more of such support, the Eagles will continue to work hard in order to make Nigerians happy.

Nigeria after the victory over Cote d'Ivoire crushed Guinea 4-1 in the semifinal and piped Burkina Faso 1-0 in the final to win the Nations Cup for the third time.

It is not surprising then that with few months to the commencement of the FIFA World Cup on Brazil, Nigerians are now beaming their searchlight for success at the World Cup at the feet of the 'Man in the Synagogue.

'NFF officials should not wait till the last moment before contacting T.B. Joshua on the chances of the Super Eagles at the World Cup considering his past predictions on the team.

“If there is anything that needs to be done before the commencement of the World Cup, the NFF officials should do that now base on the words of the Man of God.

“It will be better if we can know our stand now and not struggling later at the dying minute when it will be too late,” said Jaiye Coker.

Ex-international, Taiwo Oloyede, said there is nothing wrong if the NFF officials can approach T.B. Joshua on the chances of the Super Eagles during the World Cup.

“There is nothing in doing that, after all, the man's predictions in the past, have come to pass and so if he can be approached now it will be good for the team because we will know our chances at the World Cup.

“It will also help the players to prepare ahead of the mundial and guard against any evils that could thwart our chances of performing well at the World Cup,” said Oloyede.

A member of the SCOAN and former Team Manager of defunct Julius Berger Football Club of Lagos, Engr. Mactony Taiwo, said with God all things are possible and urged the Super Eagles to prepare very hard and well for the World Cup.

Taiwo however did not rule out the possibility of NFF officials visiting the 'Man in the Synagogue' for prayers for the team ahead of the World Cup.

“He is a man of God and there is nothing bad if NFF officials visit him for prayers for the team. More so, he has been close to the team in the past and rendered assistance through prayers.

“Doing so this time around will not be out of place especially if we must follow what the Bible says in Mathew 7:7 - “Ask and it shall be given unto you; seek and you shall find; knock and it will be opened unto u” .

“So, let NFF officials seek his help and ask for prayers for the team and let us wait for what will come out of it,” said Taiwo.

All said and done and with all the 'Man in the Synagogue' has done for the national teams and some of the players in the past years, it will not be out of place if he can tell us what is in store for the Super Eagles at Brazil 2014. It will also not be out of place if officials of the NFF led by its President, Aminu Maigari can seek his blessings before the commencement of the Mundial.

Better still, it will not be out of place if Stephen Keshi and his players can visit the SCOAN for divine intervention and blessings prior to the commencement of the World Cup or if the 'Man in the Synagogue' can visit the camp of the team for prayer sessions and blessings.

If all these can be done, Nigerians, especially football lovers will heave a sigh of relief and have the confidence in the Super Eagles before and during the World Cup in Brazil. 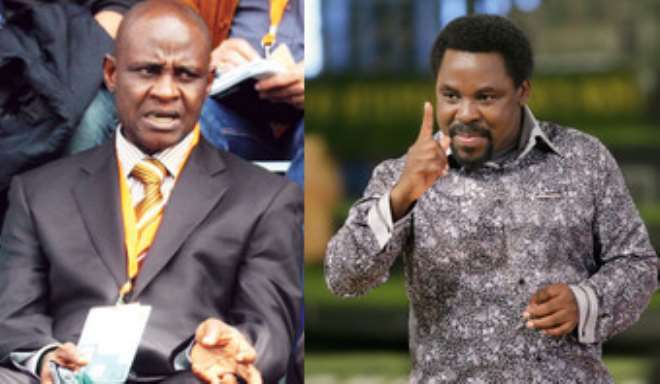 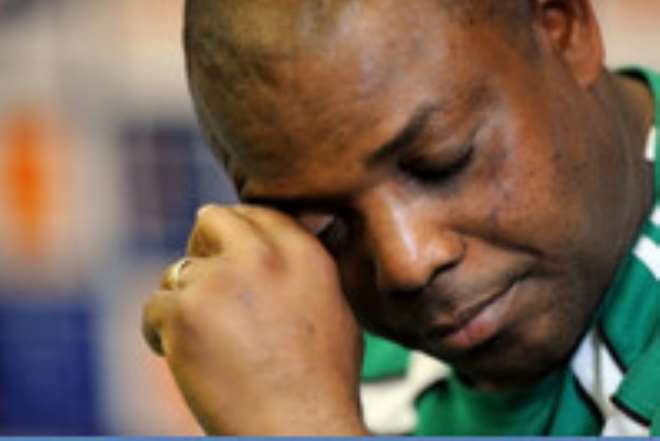 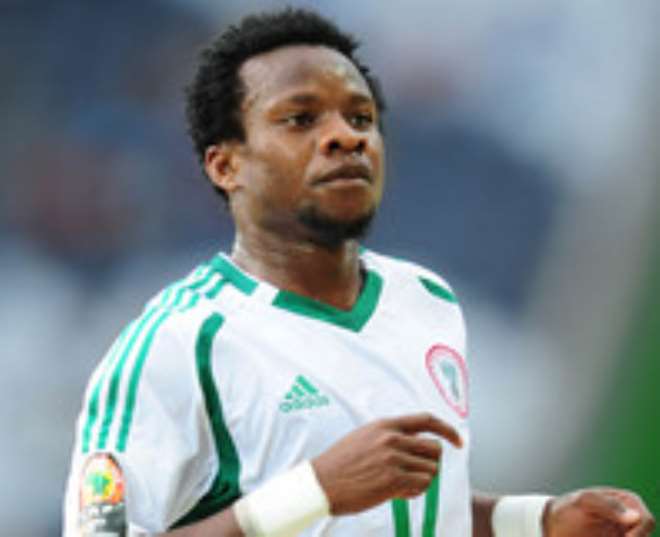 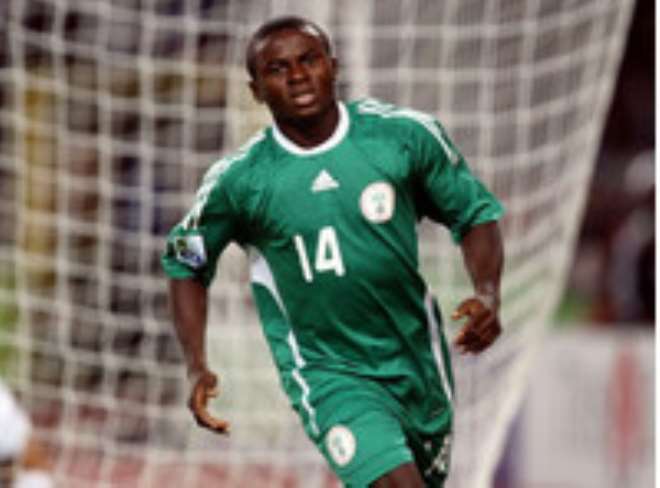