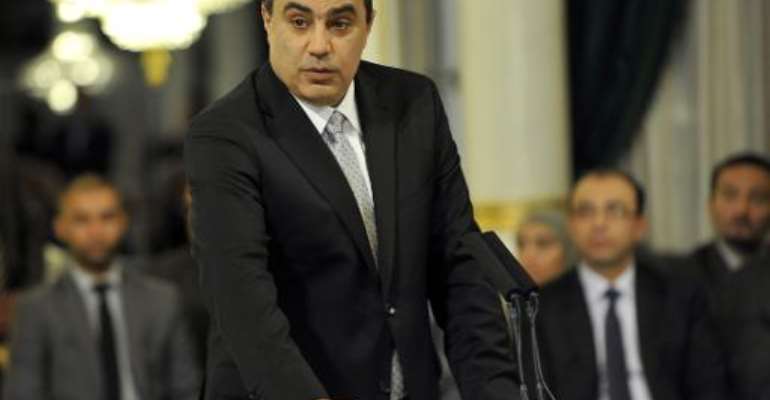 Tunisia's then Industry Minister Mehdi Jomaa takes an oath of office during the country's government swearing-in ceremony at the Carthage Palace in Tunis on March 13, 2013. By Fethi Belaid (AFP/File)

"As part of the consultations, I met the parliamentary speaker Mustapha Ben Jaafar. The consultations are ongoing and we have not reached the stage of forming a government," Jomaa told reporters.

Speaking after meeting Ben Jaafar at the National Assembly, Tunisia's newly nominated premier said his cabinet would be formed of ministers who were politically "independent" and "competent," without elaborating.

They were Jomaa's first comments since the former industry minister was chosen by Tunisia's political parties on Saturday to head a caretaker government of technocrats, after months of protracted negotiations.

Talks on the timetable and conditions for forming the new administration to replace outgoing Islamist premier Ali Larayedh's cabinet are to formally begin on Friday, according to the UGTT trade union, which has been mediating an end to the political deadlock.

Jomaa is a 51-year-old engineer with no stated political affiliation and no involvement in politics under the regime of former dictator Zine El Abidine Ben Ali.

His future government is tasked with organising fresh elections in 2014 and restoring stability to Tunisia, which was plunged into crisis with the murder of opposition MP Mohammed Brahmi in July by suspected Islamist militants.

Larayedh's ruling Ennahda party, which has been sharply criticised for failing to rein in Tunisia's jihadists since being elected in the wake of Ben Ali's overthrow, agreed in October to step down as part of a political roadmap brokered by mediators.