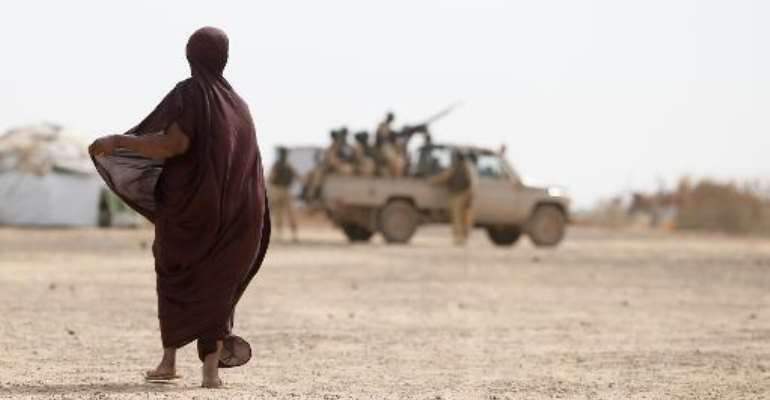 File picture shows a woman in a refugee camp in Menteao, near the Malian border in Burkina Faso on January 24, 2013. By Kenzo Tribouillard (AFP/File)

Brussels (AFP) - The European Union and the World Bank on Monday pledged more than $8 billion in fresh aid for Sahel region countries, torn by conflict and among the poorest in all Africa.

The EU will put up $6.75 billion (5 billion euros) and the World Bank $1.5 billion to help the long-suffering region, they announced.

"The people of the Sahel region desperately need more secure living standards, and our hope is this funding helps build a new path for economic growth in the region," World Bank chief Kim said in a statement.

"What we are going to do for the Sahel is without precedent," Piebalgs said.

"This region, in our view, is the most fragile in Africa and its needs in terms of development and security are enormous."

"The Sahel is a priority for the EU.... We are determined to continue and increase our support," Piebalgs said.

"Our approach is built on the principle that security is a pre-requisite for growth -- there can be no development without it."

Mali, where French troops launched an offensive earlier this year to push back Islamist rebels, is the "most fragile country" in the region, Piebalgs said, adding that it would receive 615 million euros in aid.

Ban's trip will include Mali, Niger, Burkina Faso, and Chad, where he aims to advance peace and security talks.

The UN chief said last week that the Mali crisis highlighted "the need to do more than fight fires in the region -- we need to clear away the problems that could ignite conflict and instability".

The EU describes the Sahel as "one of the poorest regions of the world and it is particularly vulnerable to most of the plagues" that prevent governments providing essential economic, social and political services.

The World Bank is adding the fresh funds to its already substantial programs for the region. The $1.5 billion, pledged for the next two years, will go toward developing hydropower and other sources of clean energy to expand irrigation and help agriculture; to communications infrastructure, and to health services.

Of the total, 3.9 billion euros will go to Burkina Faso, Chad, Mali and Niger plus Mauritania and Senegal.

The EU aid package requires approval by the European Parliament and the 28 EU member states.