Murder In The Cathedral; Why Anambra Will Pay Dearly For Voting APGA 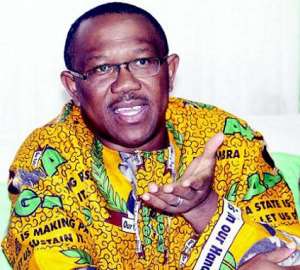 The last act is the greatest treason. To do the right deed for the wrong reason.

God gave us always some reason, some hope; but now a new terror has soiled us, which

T.S. Eliot, Murder in the Cathedral
I do not mince word that since the death of our legend, Odimegwu Chukwuemeka Ojukwu; APGA and her leaders have been dancing away the man's legacy, forgetting completely that what brought this tin god called Peter Obi to power is not due to the party political maestro but that singular last wish of Ojukwu that Igbos vote Peter Obi for a second term. I remember vividly going round Anambra State and the whole town was littered with billboards, with that statement credited to Ojukwu boldly written crafted on them.

Today, Peter Obi has not only become a tin god but an emperor, who in his quest for power is ready to do anything to see that APGA, a rejected party in the state vote in his godson, Willie Obaino, by hook or by crook, even if it means people dying. He has crowned it all with the murder in the Cathedral.

For God sake, what has politics got to do with a Church vigil in the dead of the night? Why must the governor honour an invitation by a priest only to turn the holy ground into a campaign arena? I stand by this that, if Governor Peter Obi and his APGA entourage had not gone to the Adoration ground that night; there would not have been stampede, and with all amount of sincerity, the broadcast by Obi is very far from the truth.

APGA in her usual manner has gone to Adoration ground on a purported invitation by the priest and he seized the opportunity to admonish the people. In a normal setting, Obi ought to have asked the people to pray for a successful election where there would be no bloodshed as well as crisis, but no he didn't. Rather he went sermonizing on why Willie Obaino should be elected by the over 100,000 worshippers, who began to detest his 'preaching' and started to scream 'Onwa', the titled name of Chris Ngige. It is this people who APGA refers to as ACN members.

Can APGA produce the videos of people waving brooms in the crowd since he claims that his speech is on video? Do APGA mean to insult our intelligence by telling the world that Ngige supporters were the ones who shouted “fire fire fire” that caused the stampede when he was alleged to have left his security details behind? Hard as it may be to accept, APGA has no reason to be in Adoration ground that day, and if Peter Obi was invited; he should have gone alone, just the way Ngige went when he was invited instead of turning a moment of holy worship to a black Saturday.

I shudder when some commentators attribute Obi's going to Adoration ground as a sign of humility. Humility? That someone went to the house of the man who make and remove kings without any effort; a man who at the snap of his finger, Obi will join his ancestors; a man whose voice is as the sound of many rushing waters; a man who created him, and someone calls going to worship him a sign of humility. Father, forgive them for they know not what they say? Adoration ground has been there for years, yet Obi and APGA has not deem it fit to worship there, only to visit during election time in the midnight and 25 souls that would have casted their votes were lost to death. The road leading to Adoration ground has been bad for years and yet Obi could not fix it, but when he needs their votes; he comes making promises to construct the road. Obi has never made donation to Adoration ground worshippers, but when he needed their votes, he donates a paltry sum of N5 million from the loot he has acquired over the years. God cannot be mocked; neither can the Holy Spirit be bribed!

APGA has committed murder in the Cathedral and it will be a sacrilege for Anambra people to still go to the poll and thumbprint their votes for a party that could enter a church and lives are lost. It will be a disservice to the dead souls of that day that APGA should be allowed to win this November election. It will be an immortal sin that any voter will allow his votes go the way of a party whose campaign led to multiple deaths at a holy ground, but still had the moral guts to go and campaign, when they should be mourning. APGA has murdered sleep and they shall sleep no more.

A Party Chairman who signed N5.76 billion to be paid him should his puppet win will sell Anambra State. Mince no word about it; they will keep denying the document that Elombah.com revealed, but they cannot deceive the voters who know that Victor Umeh will sign more than that, were Anambra state any of the South-South States, like Akwa Ibom or Delta States. A forewarned battle do not take the cripple unaware and it is for this reason that Anambra indigenes must take this issue serious and ask Victor Umeh and other signatories to swear with their generations that they never signed such document. Anambra will be an appendage of the PDP who are mostly known for bad governance should the party coast to victory. Make no mistake about it; the current problem happening in Anambra PDP is to make way for Willie Obaino who will soon sell the party to a party whom Nigerians are already fed up and we ask; what will Ojukwu be doing in heaven watching his home party being sold away like a mess of porridge.

I want Peter Obi of APGA to deny that he is not a liar; by saying that whoever is found using his property will have his property destroyed is not a law that applied only to enemies. Can he tell the people of Anambra State that around seven or eight months ago, a kidnapped man escaped from the house he was being held in Awator, Nimo, Njikoka LGA, Anambra State. He made it to the Police & within a day or two, a long convoy of SARS operatives visited the house (everybody at Oye Nimo saw the convoy because they stopped to ask direction to Awator) & started their investigations.

It was revealed that the man was kidnapped & held in their house by two young men whose uncle (mother's brother) is Barr. Peter Afuba, the Attorney General & Commissioner for Justice in Peter Obi's cabinet. That house was never demolished contrary to Peter Obi's words that any house used by kidnappers will be demolished & the two kidnappers are walking freely now. Rather, Peter Afuba & Peter Obi have gone a great length in suppressing this news among media houses. I dare APGA and the Anambra Government to deny this.

Yet Obi can roll out bulldozers to pull down a memorial hotel, Upper Class Hotel, without conducting any investigation; simply because the owner who happens to be his childhood playmate, Chief Bonaventure Mokwe has business interests that clashes with his friends. As I write, Obi has ordered the man's continous detention in SARS, using the instrument of the Nigeria Police, who we pay with our taxes. Let the world tell Obi to release Mokwe with immediate effect.

APGA's plan is to loot the treasury just like the case of the N255m carried by Peter Obi's convoy some years back that was intercepted by the security operatives in Lagos. Umeh Maja, then commissioner for information called a press conference to deny the report in their usual manner. After addressing the press followed by questions from journalists, it was crystal clear that they have no cogent defence. When all the reporters have dispersed to file in their reports, Maja Umeh placed a call to Ebere Ethel Obiakor, an AIT correspondent, to come to Government House, and on getting there, Maja said , "Ethel, his Excellency said he doesn't want that story to be used. Give me that tape" and on his right hand was an envelope containing some money which he offered to her, but the woman rejected, lying that the tape had already been sent to Abuja. Other Journalists who were there never used the story as they have all collected their brown envelopes.

The case of N255m was buried from the public domain because Peter obi requested the then Inspector General of Police to assign his brother who is also a police man and former Peter Obi's ADC to be the IPO that will handle the case. When the saga ended, Peter Obi and Val Obienyem travelled to Lagos, where Obi sent Val to the IPO house by 12midnight for a thank you visit with N500,000. I have never believed every news coming out of Anambra State, knowing that most stories in the Newspapers are written by Val Obienyem and sent to email boxes of various media organizations. In some cases he uses the reporter's bye-line as the originator of the story and thereafter places a call to the reporter that his name is on a particular.

This certainly are not the type of men who are fit to govern Anambra State, a home known for intellectuals and men of truth. APGA may be a party for the Igbos, but with men like Peter Obi and Victor Umeh projecting a godson whom they can manipulate; it will be in their best interest to jump ship to the Popular Ngige camp or Ifeanyi Ubah. I refuse to go with those saying the APC is a party for the Yoruba and thus Ngige is selling the Igbos. No No No! APC is not a regional party and while I may not be a card carrying member or being their fan, due to the recent high-handedness of two of their Governors; Fashola and Oshiomhole, I make bold to say that with Ngige, it's a better offer for Anambra to allow a man who could say no to the cabal who wanted to mortgage Anambra State and instead chose to be kicked out of office.

While I mourn with the families of those whom APGA caused to stampede themselves, I urge all well meaning Anambra to jettison the voting of APGA and ask them to clear the mess in the Cathedral. We might not know it, but a time will come when the 'had I known' statement will come out from the lips of those who will allow Willie Obaino to sit on the throne. I make no allegations but statements back with facts and APGA can as well challenge it.