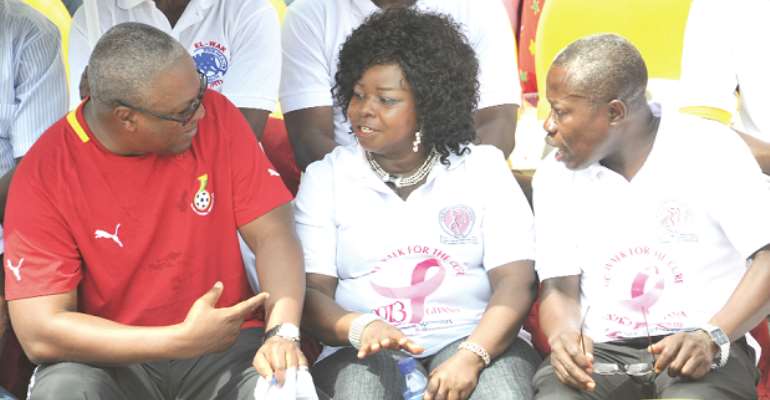 President  John Dramani Mahama has stated that the government will put the screening and investigation of breast cancer under the National Health Insurance Scheme (NHIS).

Besides, he said the government would support the training of public health nurses in the screening and treatment of breast cancer.

Those measures, he said, were to save women from developing breast cancer or dying as a result of the disease.

President Mahama said this when he addressed students and members of religious groups and keep-fit clubs who participated in a breast cancer awareness walk in Accra on Saturday.

The 10-kilometre walk began from the Obra Spot at the Kwame Nkrumah Circle through some principal streets of Accra and ended at the Accra Sports Stadium.

Organised by the Breast Care International Ghana (BCIG), a non-governmental organisation, the walk was held on the theme: "Join the Fight—Together We Can Make a Difference."

He, therefore, stressed the need for women to visit the hospital at least once a year for their breasts to be examined.

Again, he said women should regularly examine their breasts, and asked husbands to support their wives in that regard.

The President said the breast cancer advocacy by the BCIG and other organisations had encouraged more women to go for screening, which had contributed to the reduction in the infection rate of the disease.

Besides, he said the advocacy had encouraged the government to cover breast cancer treatment under the NHIS.

President Mahama said the current system under which the NHIS covered only the treatment of breast cancer was not good enough; hence, the decision of the government to include screening and examination under the scheme.

That, he said, was crucial because "prevention is better than cure."

He said it was important to get the statistics on breast cancer as it would help in the planning and treatment of the disease.

Cervical Cancer
President Mahama said cervical cancer was another disease which killed a lot of women.

He said the government would start a pilot vaccination exercise to vaccinate all adolescents and added that the exercise would be extended to other women.

Breast Care International Ghana
The Founder of the BCIG, Dr Mrs Beatrice Wiafe Addai, stressed the need for women to examine their breasts regularly to see whether there were any unusual developments.

She said early detection of breast cancer was the surest way of treating the disease.

Borders secured against potential terrorist attack in Bolga,...
19 minutes ago