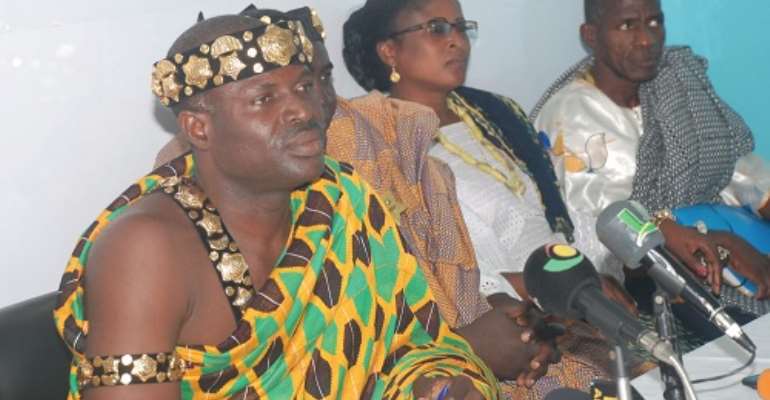 Chiefs of the Aflao Traditional Area have stated that Torgbui Afla Awunor Detu IX, was the right person for the stool and was properly enstoolled.


They added that the installation of the new chief for Aflao was not an attempt to torpedo 'or create a rival chief in our area but rather to continue with what our predecessors have left for us and to protect, preserve and promote our long cherished heritage'.

Torgbui Tengey Sabbah V, a divisional chief of Aflao, said this when he  addressed a press conference in Accra on what he described as 'distortion, misrepresentation and misunderstanding  of facts with regard to the installation of Torgbui Afla Awunor Detu IX as the Paramount Chief of the Aflao Traditional Area.

He explained that although the kingmakers had delayed in installing Torgbui Afla, years after the demise of his great grandfather, Awunor Detu VII, he was not installed to 'compete or challenge or fight Torbgui Fiti'.

He described as unacceptable recent pronouncements by Torgbui Fiti and his cohorts which were designed to put fear and panic in the kingmakers for doing the right thing.

Torgbui Sabbah accused Torgbui Fiti and his cohorts of allegedly subjecting some of the kingmakers to inhuman treatment to the 'extent that some of the [kingmakers] were kidnapped'.

He explained that the newly installed chief, Torgbui Afla Awunor Detu IX, who would soon be presented to the chiefs of the Aflao State and the Anlo Traditional Council, was not sitting on a new stool as was being claimed.

Regarding threats from Torgbui Fiti, he gave the assurance that although they were not at war, 'if Torgbui Fiti dares us for war because of our own property and heritage, then we are battle ready for him and whoever wants to support his diabolic act'.

Torgbui Sabbah appealed to Torgbui Fiti to go to court if he sincerely believed that 'we are trespassing into his territory.'