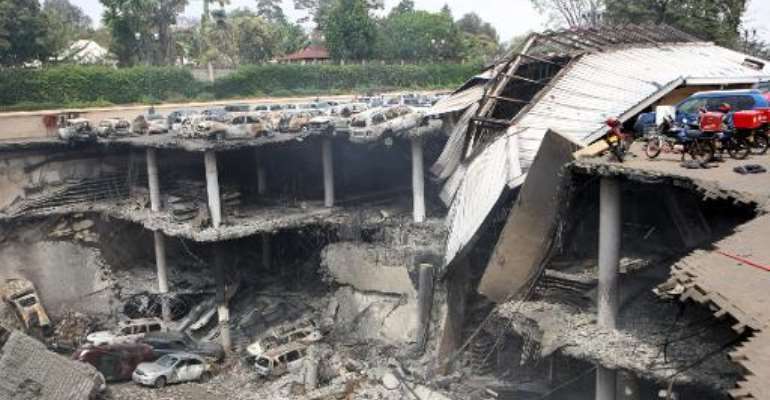 A handout picture from the Kenyan presidency shows a destroyed section of the Westgate mall in Nairobi on September 26, 2013. By (KENYAN PRESIDENCY/AFP/File)

"Another suspect was arrested today and is undergoing interrogation," Joseph Ole Lenku told reporters in his latest briefing on the status of the investigation.

The latest arrest, on which he provided no further detail, brings to nine the number of suspects currently held in connection with the raid, one of the worst attacks in Kenya's history.

The raid was claimed by the Shebab, an Al-Qaeda linked Somali group which has vowed more attacks if Kenya failed to pull its troops out of Somalia.

Witness accounts and experts point to the key role played by militants based in Kenya, which has a large ethnic Somali community.

Lenku said that "156 witnesses have recorded statements" as Kenyan and foreign investigators attempt to piece together what happened during the 80-hour siege.

The minister also said that three men suspected of looting shops inside the mall during the chaos had been held.

"We wish to affirm that government takes very seriously allegations of looting and that those found to have engaged in the looting will be prosecuted," Lenku said.

Lenku said that owners of businesses at the shopping centre had been allowed into the strictly sealed-off site to check their shops following a first report of looting.