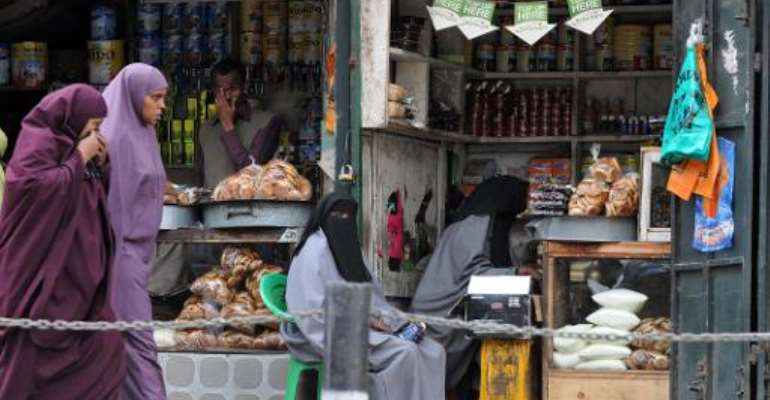 Eastleigh is often referred to as Nairobi's "Little Mogadishu". By Simon Maina (AFP/File)

Nairobi (AFP) - Abdurahman Issa Mohammed, a Somali refugee in his sixties dressed in a smart shirt and blazer, says he has "not one grain of support" for the Islamist attackers from his country behind the Westgate Mall massacre.

But he is scared of what may come next.

"What makes us afraid though is that we are punished for the acts of those who displaced us and who killed our family members," he told AFP in a cafe in Nairobi's Eastleigh district, often known as the capital's "Little Mogadishu."

"We are mourning the victims of the attack. We are crying for them," he said.

Mohammed is one of tens of thousands of Somali's in Nairobi who have fled a nation engulfed in an almost perpetual state of war and anarchy since the collapse of Somalia's hardline regime in 1991.

Members of Nairobi's Somali community have loudly condemned the perpetrators of the bloody four-day mall siege, but live in fear of a backlash that threatens a mostly peaceful coexistence.

Around him, vendors hawk pawpaw and sugar cane on the muddy street, squeezed among courier services offering discounts on parcels sent to Dadaab refugee camp, home to some 400,000 Somalis in northeastern Kenya.

Somali is the language of choice in the district, officially known as Eastleigh, even if the signs are mostly in English. It is home to tens of thousands of ethnic Somalis.

The Westgate mall attack, which left 67 dead and shocked the world with images of corpses in shop aisles, was the work of Al-Shebab -- an Al-Qaeda-linked rebel group who control large swathes of rural southern Somalia.

But the attack has also raised the spectre of ethnic tensions between Kenya's majority Christian population and its Muslim minority.

Reclusive Shebab chief Ahmed Abdi Godane said on Wednesday the bloodbath was a warning to Westerners who "backed Kenya's invasion (of Somalia) that has spilled the blood of the Muslims for the interest of their oil companies".

"The Shebab is not a Somali organisation," Mohammed said of the group, which has evolved into a magnetic force for would-be international jihadis. "We don't accept that they have the same religion as us."

Ibrahim Hassan Jama, a textiles trader originally from the southern Somali port city of Kismayo, said he had been "very sorry to hear about the attack" and that "neither Christianity nor Islam allows this sort of killing".

"We have been given hospitality here and our children are in Kenyan schools. We don't want anyone to hurt them," he said. "Whenever anything happens we Somalis are always the prime target.

"I think this government is responsible enough not to punish us," he said, but added that the Kenyan police "are always brutal."

His words were echoed by Yusuf Abdullahi Ali, an importer of electronic equipment in his thirties, who was indignant he should not be smeared with the same reputation as the attackers.

"Every time there is an attack, even if the perpetrator is a non-Somali, there is retaliation against us Somalis," he said.

"They come from Canada or wherever," Ali said of the rebels. "Mostly they kill Somalis and yet we get mistreated because of them."

He said Kenyan police regularly descend on the area for arbitrary round ups of suspects, going house to house, and said he was arrested in late 2012 but managed to prove his innocence.

Across the street, Ubah Ali Hassan crouches on a tiny stool behind the counter of the tea-shop she owns, chopping ginger that she throws into a blackened pot on a charcoal brazier.

"We are very, very sorry about what happened," she said.

Customer Jamal Hussein Diriye, one of a dozen men packed into her tiny teashop, wanted to keep a low profile.

A refugee who lives with his wife and children in South Africa, he was supposed to be heading back there via Nairobi after visiting his mother in Somalia when the attack happened. He said he was now scared of continuing his journey for fear of being arrested at Nairobi airport.

"There is always the fear they may say we're terrorists running away," he said. "For the time being I'm staying put here."