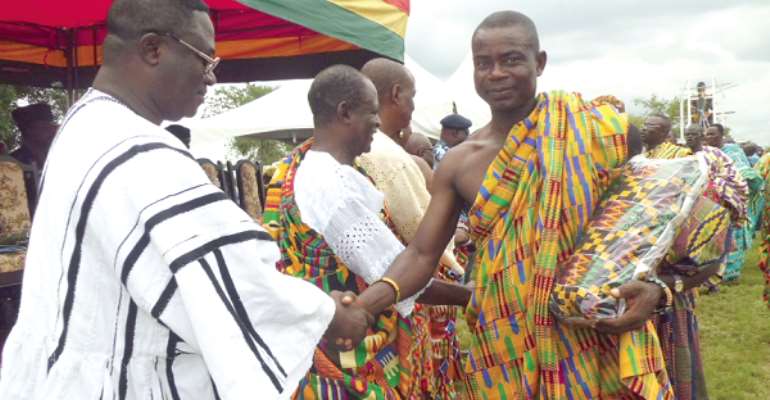 The people of the Agotime Traditional Area in the Volta Region have celebrated their annual Kente festival (Agbamevorza) with a call on stakeholders to repackage the kente industry and venture into the international market.

This is because the Ghanaian economy has over-relied on unprocessed agricultural products and minerals over the years, hence the new emphasis on the non-traditional export sector

The Governor of the Bank of Ghana, Dr Henry Kofi Wampah, who made the call, urged all communities who had similar products like Kente to explore unfolding opportunities.

He said the government had targeted to boost the non-traditional export crop sector to $5.1 billion by 2017, raising it from the current level of $2.46 billion.

He said the government was committed to removing all obstacles hindering the export sector and that it was important for manufacturers of Kente to take advantage of new opportunities to enhance the industry.

Dr Wampah urged Ghanaians to patronise more locally manufactured products, since their preference for imported goods did not only enhance the economies of foreign countries but also caused a loss in foreign exchange earnings for Ghana. 'We should eat and wear what we produce,' he added.

He said the problem of developing countries was poverty and urged all concerned citizens to focus on interventions aimed at improving the lives of people.

In an address, the Deputy Minister of Trade and Industry, Mr Nii Lante Vanderpuye, said under a national export strategy, at least one project would be dedicated to women in the small and medium enterprises (SME) sector which focuses on high fashion market-oriented Afro-centric textiles and garments.

He said Ghanaian women had distinguished themselves in the fashion business and Kente was one of the Afro-centric textiles in which they had achieved the credit.

Mr Vanderpuye announced that handicraft villages would be established in the Upper East, Central, Volta and the Eastern regions very soon and that land earmarked for one of such projects at Agotime-Kpetoe should be protected.

He said the ministry would help to inject necessary innovations in the kente industry to improve on rate of production, adding that efforts would be made to patent Kente as a national asset.

The Volta Regional Minister, Mr Joseph Nii Laryea  Afotey-Agbo, said Kente was a matchless indigenous fabric and a very unique trademark that separated Ghanaians from the multitudes of citizens across Africa and the world at large.

He said there was the need to analyse the strengths of the industry to generate more employment opportunities for the youth and that the people of the Volta Region must boost and establish their type of Kente as a brand for the region and the nation at large.

The Member of Parliament for the Agotime-Ziope Constituency, Mrs Juliana Azumah-Mensah, urged the traditional authorities to release enough land for the establishment of the kente village project and added that they should be prepared to add value to improve their products.

The Agotime-Ziope District Chief Executive, Mr Michael Kobla Adzaho, announced that a new police station project for Kpetoe was in the offing, adding that funding had been secured and procurement processes were also underway.

In a welcome address, the Paramount Chief of Agotime,  Nene Nuer Keteku III, expressed regret that most contemporary weaving communities no longer paid particular attention to the aesthetic and cultural values of the Kente cloth and urged them to uphold the values.

The chairman for the occasion was the Volta Region representative on the Council of State and Paramount Chief of the Ziope Traditional Area, Togbe Binah Lawluvi VI, who said festivals should serve as a fulcrum for development and job creation to solve problems facing the youth of today.