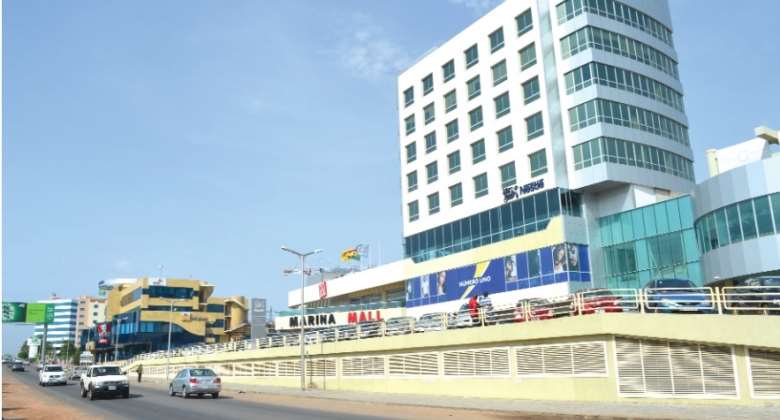 Accra has undergone extensive development over the past two decades, transforming it into a city worth the accolade 'Gateway to West Africa.' But if the sprouting of splendid architecturally-designed high rise glass buildings across the city is any beauty to behold, the magnificent structures and developments taking place within the vicinity of the Kotoka International Airport (KIA) are, perhaps, more stunning for the eyes to feast on.


The Airport City Project, even at 70 per cent completion stage, is a burgeoning city within the capital city of Accra.

The sparkling Silver Star Tower, the 3-Star Holiday Inn Hotel and the exquisite UT Bank building are some of the glittering signature structures already causing people's imagination of the Airport City to go 'waaaoo!'

But the tallest structure in the high-class urban city enclave - a 13-storey complex with a revolving restaurant at the summit, cinema halls, retail outlets and offices - will surely steal the major attraction, especially in respect of entertainment, after its completion.

Other facilities such as the One Airport Square (a mix commercial/office structure), the Marina Mall and the SSNIT Emporium, all add to the elegant spectacle of the Airport City.

Just across the main 37 Military Hospital-Airport Road, a plush structure housing the Ministry of Foreign Affairs gives an additional impetus to the flashy developments within the vicinity of the KIA.

The vision behind the creation of Airport City, according to the Properties Manager of the Ghana Airport Company Limited (GACL), Mr Kofi Yeboah, is to expand the commercialisation of the airport business portfolio and make air travelling a more pleasant experience.

Past situation
About three decades ago, the 43-acre land on which the Airport City currently sits was without form, indeed, it was void; it was a bushy, rough terrain, which conveniently served as the den of marijuana  smokers and criminals.

For some residents, traders and commuters who visited the KIA daily for various engagements, it served as a vast public place of convenience where they attended the call of nature in what is popularly known in many communities as 'free range'.

For others, the area was a fertile land for the cultivation of maize, cassava and vegetables.

The 37 Military Hospital-Airport Junction Road was a single carriageway; the road leading from the El-Wak Traffic Intersection to the Airport Roundabout was non-existent, and the road from the Silver Star Tower Traffic Intersection to the junction near Aviance Cargo was not a thoroughfare. The only attractive structure, which gave a foretaste of what the area would be in the future, was the Opeibea House. That building still looks dazzling, three decades down the lane; an indication of the vision that underpinned its architectural design and construction.

But the moment the area was designated as part of the Accra Redevelopment Scheme sometime in 1996/97, it began to take the shape of modernity, with some major infrastructure developments taking place.

Airport City Project
The Airport City Project is a modern urban development concept that feeds into the core mandate of the GACL to develop and operate airports, and also expand the commercial component of the airport business portfolio.

Mr Yeboah says there is the need for an expanded airport commercialisation based on the principle that airports have ceased to be mere terminals, but economic growth outlets, such as promotion of trade and employment generation.

It is for such a purpose that the government established the GACL and designated it as one of the frontline agencies of the Gateway and Investment Project.

One of the key strategies of the GACL, in line with its frontline role of the Gateway and Investment Project, is to make the KIA a hub in the sub-region where travellers from other West African countries would connect their flights to Europe, America, Asia and other parts of the world.The SSNIT Emporium

To achieve this aim, Mr Yeboah says it is imperative to develop both the aeronautical and non-aeronautical infrastructure of the KIA.

Mr Yeboah says in recent times, commercial real estates have been identified as a high-value enterprise that enhances the economic viability of airports.

At the moment, there are 19 investors operating at the Airport City, which is a mix commercial development aimed at delivering high-quality services.

The project is based on the service plot model in which the GACL provides high-quality infrastructure and leases out plots to investors following a competitive tendering process.

Challenges
With 70 per cent of the project completed, there are a few investors who are yet to finish their work to bring the Airport City into full shape.

But Mr Yeboah says the inability of the remaining 30 per cent investors to deliver their projects on schedule is a major challenge to the GACL.

He explains that the project is very dear to the government and has, therefore, urged all investors to develop their projects without further delay.

Another challenge that is envisaged by the GACL management is parking space at the Airport City, considering the anticipated large number of people to patronise it.

According to Mr Yeboah, management intends to construct two multi-storey car parks to absorb the large fleet of vehicles expected to zoom into the city within the capital city.

That may be a good intervention, but the large number of vehicles expected to trek in and out of the Airport City raises concerns about vehicular traffic in the vicinity.

Already, the problem is rearing its ugly head, as vehicular traffic builds up around the area, especially during rush hours in the mornings and evenings.

The situation is a good omen for street hawkers who keep increasing in numbers on the streets around. But for motorists, it is one hell of a moment, as they get stuck in traffic for long periods of time.

Anticipating such a problem, Mr Yeboah says the GACL is collaborating with the Department of Urban Roads (DUR) to conduct a traffic study in the area with the view to easing traffic flow.

Safety issues
With the construction of tall buildings and the large number of people expected to visit the Airport City daily, the issue of safety comes naturally as a matter of public concern.

However, Mr Yeboah believes with the appointment of a structural and civil engineering company to supervise work on the projects in the city, there should not be any cause for alarm. Moreover, he says, it is expected that the Accra Metropolitan Assembly (AMA), having granted building permits for the projects, will ensure that the developers have satisfied all safety requirements.

When asked whether the construction of the tall buildings at the Airport City would not compromise flight safety, Mr Yeboah said insofar as it was not within the flight circuit or the critical flight zone, it would not pose any problem.

He further explains that the closer a building is to the runway, the shorter it has to be, so buildings at the Airport City, which are far away from the runway, pose no danger to flights.

In any case, he adds, the Ghana Civil Aviation Authority (GCAA) has the mandate to regulate developments around the airport in accordance with its Aerodrome Safety Standards.

Phase II
Ahead of the full completion of the Airport City project, the management of the GACL has already been to the drawing board to plan Phase II of the project.

According to Mr Yeboah, plans are far advanced for a second phase, which would be sited on a larger land near the Polo Grounds. That will surely give the non-aeronautical part of the KIA a beautiful outlook and underline its status as the 'Gateway to West Africa.'

NPP flagbearer race: Alan Kyerematen is coming, I'm not an e...
36 minutes ago

Agenda 111 delayed because of location disputes, but I will ...
44 minutes ago