Justice Kpegah And His NDC Exposed! 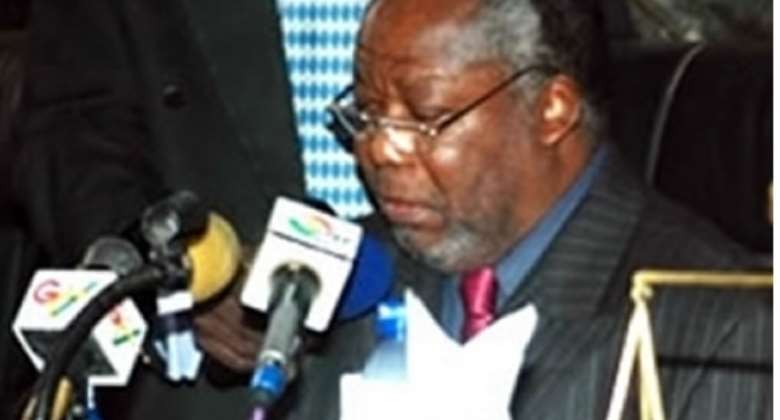 Justice Kpegah promised Ghanaians a 'Thriller in Manila' in the case involving himself and Nana Addo where he has sued Akufo Addo for impersonation. The allegations Kpegah makes however are shallow and laughable and more in tune with those one would hear in a cantata or concert party episode and certainly not a thriller.

It is mind-numbing and self-evidently preposterous and really raises no mysterious questions or contains any mysteries to constitute a thriller or even make it bear the semblance of one.

I am sure in my mind that had it come from any other quarters than that of a former Justice of the Supreme Court, who by virtue of being a Supreme Court Justice establishes a prima facie case of mental stability; Kpegah would have been bundled up by his family, friends or even the State and thrown into the nearest shelter for a much deserved mental treatment. I do not make the above statement as a trivial point but actually base it on Kpegah's own allegations contained in his writ.

The contention Kpegah makes in his writ raises very fundamental and honest questions about his lucidity and I shall show same momentarily. I submit that either Kpegah is not functional mentally, having not recovered from his disappointment at not being appointed Chief Justice or has not properly adjusted to his new position as a former Justice of the Supreme Court.

In his writ, Kpegah claims that upon his private investigations he has discovered that Nana Addo Dankwa Akufo-Addo did not sign the matriculation book of the Ghana Law School, the evidence of being a student in that school.

Outside that, he alleges that Akufo-Addo has no classmates and teachers and thus was not called to the Bar. He further alleges that the true William Addo Dankwa Akufo-Addo was murdered somewhere 'in Ghana or London'.

Indeed, he promised to get to an order from the courts directed at the coroner to exhume a certain body which he claims was buried under mysterious circumstances and is supposed to be the body of the real William Addo Dankwa Akufo-Addo. Reducing tediously all the other trash in his statement of claim, what is left it appears is the above.

Now if you find some aspects of it incongruous, you are in good company. Kpegah's allegations are a bundle of contradiction. They are shallow in reasoning as they are in fact.

They are utterly confusing and create a dull wonder as to why it would come from him and not some current patient of Ankaful or Pantang. Now though a few facts have been settled that exposes the farcicality of Kpegah's allegations and gives us an indication as to what his motivations may be and generally what he is intent on achieving.

The second is an extract from the Ghana Roll Book for July 8, 1975.Roll, certified true copy, which does not only show that Nana Addo was duly called to the Ghana Bar but actually shows conclusively that he signed the Roll as required the then Chairman of the General Legal Council, His Lordship the Chief Justice Samuel Azu Crabbe and the Judicial Secretary.

If Kpegah had indeed conducted a discreet investigation into the matter and indeed sourced some of his claims on documents he claimed to have obtained from the General Legal Council, then he could not, except he was motivated by his malevolent desire to destroy the reputation of Nana Addo and knowing full well that his party's rented press and useful idiots would jump rabidly to his side, have failed to notice these facts.

It is also blindly obvious that Kpegah, except he had some other ill-intents would have also noticed being a former Justice of the Supreme Court that the right place to have sent his suit was the General Legal Council and not the High Court. I pray the court dismisses this ridiculous suit with costs as a deterrent against the Justice further engaging in ludicrous legal adventures and abusing the legal process.

Let's go on our knees and pray for Akufo-Addo for God's inte...
27 minutes ago

NDC race: I will retain my seat and help bring Mahama back t...
37 minutes ago