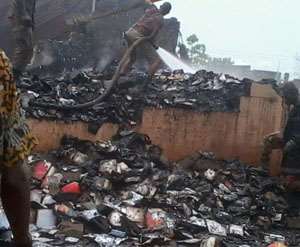 According to a teacher who spoke to DAILY GUIDE via phone, the final year students who were in the classroom around 1:00am studying saw smoke coming from the computer room at the administration block and raised the alarm.

He said they called the Ayum Fire Service at Mim but could not get through to them so they had to resort to Goaso Fire Service which responded quickly to their call and came to the school to save the situation. The bad road leading to the school, the teacher revealed, made it difficult for the personnel to reach the school.

According to him, the 2012 WASSCE results which were recently handed over to the school were all burnt to ashes because they had been placed on top of other papers at the office.

When DAILY GUIDE contacted the Headmaster, Patrick Kwabena Adjei, he confirmed the incident and said the damage was very extensive. He said all the important documents in the school were burnt.

'Immediate cause of the fire is not known; we are now coming to meet to know the way forward,' he added.