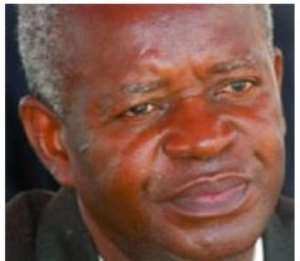 This statement was contained in his article featured in the Daily Graphic titled 'why the scientific community is wrong on homosexuality.'

The article catalogs arguments of what he believes is "woefully wrong scientific evidence backing homosexuality".

He explains that more than ever, the scientific community is facing stronger political pressure to scientifically certify homosexuality as a normal lifestyle ever since the American Psychiatric Association (APA) bowed to initial pressure to remove homosexuality from its list of disorders after 1968.

He retold the story of how it took scientists 18 years to classify all genes that direct human behaviour. The team of international scientists found 1,168 genes but not a single gene for homosexuality was discovered clearly making the tendency unnatural. He further explained that it is possible for a man to have more female hormones and develop an attraction for men and vice versa but this is also as abnormal as having Siamese twins.

"It will not be right to say that a person is born homosexual; it is more correct to say one may be born with a homosexual tendency. Then, that is where socialization comes in. Some people are born left-handed. Our society does not accept one greeting or eating with the left hand so we socialize such a person to use the right in greeting and eating"

He outlined a minimum criteria for classifying a condition as a psychiatric disorder which is that it should be a significant departure from the norm and the condition should cause pain or distress to the person or to others. These criteria have nothing to do with one's personal choice. On this basis, homosexuality properly qualifies as a psychiatric disorder even if gays feel good about their lifestyle.

In an example, he referred to fetishism, a condition where one smells a woman's panties for sexual gratification as a psychiatric disorder although the patient may see nothing wrong with it.

Conclusively, Dr. Akwasi Osei, posits that "homosexuality is not natural and should not qualify for human rights, which are natural rights. In its true nature, it is a disorder".

He therefore condemned what he termed the 'glorification and glamorization of homosexuality ' and advised that 'illness required treatment and that gays should be asking for the right to be treated.