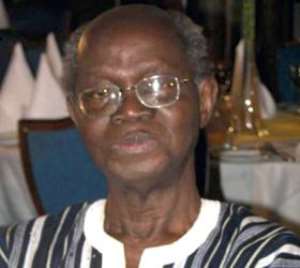 The lecture was on the topic 'Creating Transformation in Contemporary Context: Pan-Africanism as a paradigmatic strategy', and was delivered by Emeritus Professor J.H. Kwabena Nketia, a music professor.

Prof Nketia said learning the colonial legacy was right but was also wrong to displace our traditional and cultural values and that the concept of Ghanaian and African music was gaining  momentum in the western world and needed to be preserved.

He said Africans were in the position to select and learn western music and that traditional music should receive the needed attention from Africans, 'the originators'.

He noted that African music differed from western music and had become an alternative in the global world, adding, 'I am interested in creating transformation of materials that makes good used of African traditional music.'

Professor Atukwei Okai, Secretary-General of PAWA said the 20th anniversary celebration was meant to afford the African people  a moment of pause within which they may take pains to reflect on and appreciate the nature and the extent of the contribution of African Writers to the development of the continent.

He said the PAWA annual lecture was instituted to sensitize the African people to know the basic truism of the their common destiny through literature for which prominent sons and daughters of Africa and the Diaspora who had excelled in any field of endeavour such as literature, politics, science, and religion were invited to address an outstanding terms of its consequence for the African condition.

Nana Kobina Nketsia, Paramount Chief of Esikado Traditional Area and Chairman of the occasion, said the true explanation and understanding of African music was on the basis of the African tradition.

He appealed to Africans on the continent  and those in the Diaspora to protect and preserve African tradition and culture in every situation and wherever they found themselves.