Deal with those who abuse their offices - Aid groups tell Mahama 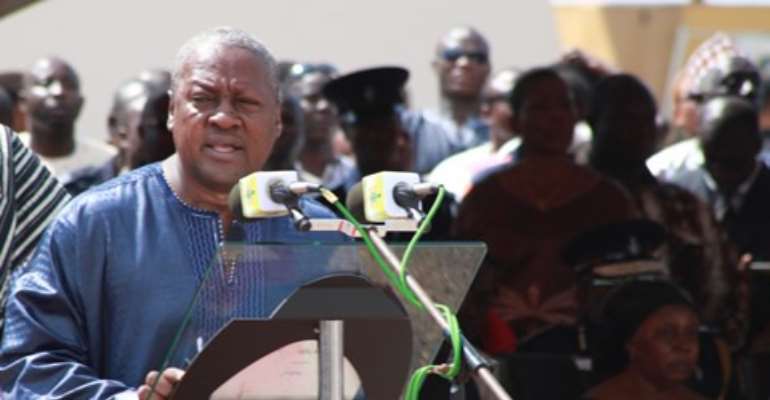 The Ghana Aid Effectiveness Forum, GAEF, is asking government to provide anti-corruption agencies the enabling environment to bring meaning to accountability, by dealing with persons who abuse public offices.

GAEF has indicated it will focus on analysing the 2013 budget and track public expenditure in key sectors and hold government accountable to the set targets.

A statement issued on Wednesday observed, “budget transparency has become a tool for facilitating a relationship between public budgeting and civil society demand, rather than as just an element of governmental accountability to parliament”.

Read the full statement below:
GHANA AID EFFECTIVENESS FORUM (GAEF)
Press release
The Ghana Aid Effectiveness Forum (GAEF) congratulates the President of the Republic of Ghana, H.E. John Dramani Mahama on the delivery of the State of the Nation Address.

As Civil Society Organisations, we note the importance of his address as a source of hope to the good people of Ghana who are distressed over current challenges such as the load shedding, erratic water supply and the rise in fuel prices to mention but a few.

We therefore welcome the President's outline of initiatives to restore stability in the supply of energy and indicate our preparedness to hold government to account on these commitments.

We note that the current situation exposes the low investment that had gone into the provision of social services over the years. This has compromised the capacity of public institutions to meet the growing demand of the population. Equally important is the effective management of the limited resources which we have over the years observed as a challenge.

Generally, output from public social service agencies in the country have fallen short of investments. It is for these reasons that members of the Forum have taken keen interest in monitoring government's budget in key sectors such as health, education, water and sanitation, oil and gas among others.

We believe that it is only in the spirit of transparency and accountability that we would be able to ensure that public resources are exploited for the optimum benefit of citizens. Being open about budgets, expenditure and outcomes as well as promoting citizens' participation in decision making increase citizens' confidence in governance and elicit mutual responsibility in the mobilization of revenue for instance.

Social Protection
We are happy to note that the President's State of the Nation's address acknowledges that the poor and marginalized in the country require social protection to guarantee them dignified life. Again, the President's observation of the fragmented nature of social protection programmes in the country is consistent with our monitoring findings. Furthermore, our research findings have shown that consistently the core poor and marginalized groups have often been shortchanged in the implementation of such social interventions.

In 2011, a Work Bank evaluation showed that over half of outlays of a number of social protection programmes in the country did not reach the poor. The LEAP which was the best targeted programme had 42.5 % of its outlays not reaching the poor. We are therefore in agreement that all social protection programmes be relocated to the new Ministry of Gender, Children and Social Protection. However, the President failed to give timelines for the realignment of these programmes.

It is our anticipation that government would provide clear timelines for consolidation of all these programmes to aid our monitoring. Also, we expect the 2013 National Budget and Economic Policy to allocate adequate resources to enhance the capacity of the new Ministry to be able to effectively coordinate and discharge its duties.

Resourcing Public Anti-Corruption Agencies
We appreciate the President's acknowledgement of civil society role in promoting transparency and accountability. The Forum would take advantage of the government's mechanisms for promoting citizens-based monitoring and evaluation of public policy and programmes and provide feedback for improving targeting social and economic programmes, as stated by the President.

However we note that accountability would be achieved if government is responsive to the issues identified through monitoring and evaluation. To this end, the role of independent anti-corruption agencies is crucial to ensuring that those who abuse public offices are dealt with in accordance with the law. Over the years, successive governments have paid lip service to the fight against corruption, and institutions responsible for fighting the canker have been woefully under-funded, hence their inability to deliver the expected results.

The 2009 Annual State of Anti-Corruption Report noted that weak state support (in particular financial support) to key public anti-corruption institutions has affected the performances of these institutions. Budgetary allocation to institutions such as CHRAJ, SFO (now EOCO) and the Ghana Audit Service are often inadequate and not released on time. For instance, CHRAJ, SFO and the Ghana Audit Services received 49 %, 45 % and 59 % respectively of total budgetary allocation in 2009. The Forum expects that the 2013 budget would demonstrate government's commitment to fighting corruption by making adequate allocations but also ensure full and timely disbursement to enable these agencies effectively deal with corruption.

Right to Information Bill
In 2012, our attempts to monitor government's budget was challenged by access to information. Even where accessible, data was processed in a manner that hindered micro level analysis. This situation, we noted is due to the long delay by Parliament to pass the Right to Information Bill. Also, poor record keeping at the various Ministries, Departments and Agencies (MDAs) is hampering access to disaggregated data. Thus it is our hope that the 2013 budget would provide adequate resources in this regard.

In summary, the GAEF reiterates its support to government to promote transparency and accountability. Budget transparency has become a tool for facilitating a relationship between public budgeting and civil society demand, rather than as just an element of governmental accountability to parliament. In 2013, the Forum would focus on analysing the budget and track public expenditure in key sectors and hold government accountable to the set targets. It is our hope that independent anti-corruption agencies would be well catered for by the 2013 budget and provided the enabling environment to bring meaning to accountability by dealing with persons who abuse public offices.

The Ghana Aid Effectiveness Forum (GAEF) is an umbrella body of national civil society networks working on aid and development effectiveness issues. It is made up of 15 platforms representing thematic areas such as agriculture, local production and labour, gender, MDGs, monitoring and evaluation and health. Others include youth, environment, education, water and sanitation, oil and gas and right to information, as well as poverty reduction, governance and Civil Society Organizations' accountability. The Secretariat of the Forum is hosted by SEND-GHANA