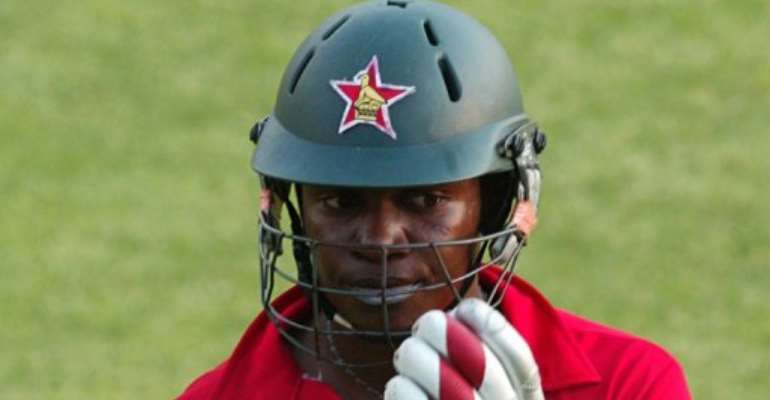 Zimbabwe batsman Chamu Chibhabha leaves the field at the Harare Sports Club in Harare on October 17, 2011. By Jekesai Njikizana (AFP/File)

ST GEORGE'S, Grenada (AFP) - Disciplined work by the West Indies in the field restricted Zimbabwe to 211 for nine after the visitors chose to bat first in the third and final one-day international on Tuesday.

Seeking a clean sweep of the series after contrasting victories in the first two matches, the home side's bowlers kept wayward deliveries to a minimum.

They also reaped the reward against the Zimbabweans, a couple of whom got decent starts but were then unable to carry on, as occurred in the second ODI on Sunday when three got past the 50-run mark.

Chamu Chibhabha, strangely demoted to number six in the order, gave the innings some respectability with an unbeaten 48, the top score, accelerating somewhat after a very slow start and hoisting the final ball of the innings from West Indies captain Dwayne Bravo for six over backward square-leg.

Playing his first match of the series in place of all-rounder Andre Russell, left-arm spinner Veerasammy Permaul was the most successful of the Caribbean bowlers, claiming three for 40 off his 10-over allotment.

His dismissal of Zimbabwean captain Brendan Taylor (39) proved crucial in stalling the tourists' effort and the Guyanese player added the wickets of Malcolm Waller and Regis Chakabva to complete a satisfying morning's work.

At the top of the order, Vusi Sibanda promised a substantial innings, but yet again failed to carry on from a good start, falling to fast bowler Tino Best for 41.

Following his man-of-the-match exploits two days earlier when he claimed career-best figures of six for 43, Bravo added two more wickets to his tally, although he was the most expensive of the bowlers.

Bravo also impressed in the field, running out debutant Tinotenda Mutombodzi with a direct hit of the stumps at the non-striker's end from mid-off.

Akufo-Addo Wants 4more Years For What? – Mahama
1 minute ago