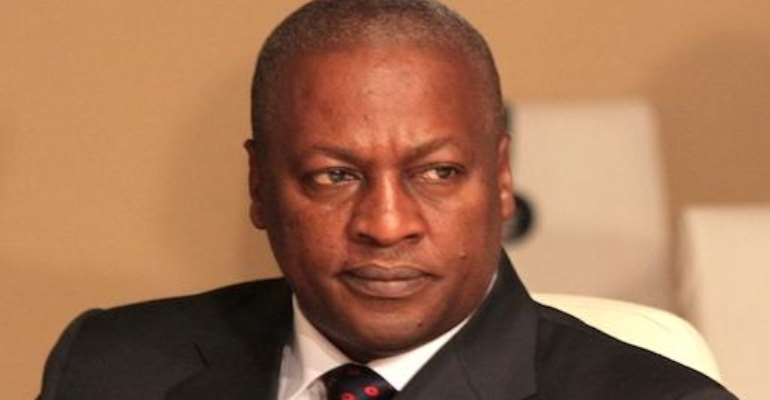 Takoradi, Feb. 25, GNA - President John Dramani on Monday re-assured Ghanaians that the electricity challenges the country was currently facing would become the thing of the past by the middle of the year.

He said: 'We know that the challenges started as a result of the breakdown of the West African Gas Pipeline, which we are working to fix, but in the meantime, the 98 percent of the Aboadze T-3 Plant and with the Bui dam project which will soon be commissioned, we shall overcome the deficit.'

President Mahama gave this assurance when he paid a day's working visit to the Sekondi/Takoradi Metropolitan Assembly, where her visited energy and water projects.

The President during the visit commissioned 87 megawatts of the T-3 Aboadze Thermal Plant, which is expected to provide a total of 132 megawatts of power on completion.

He also visited the Daboase water treatment plant, where two Naval officers lost their lives a couple of days ago, met the bereaved families of the deceased and visited the West African Gas Pipeline under construction at Aboadze.

President Mahama said the visit was in fulfillment of his promise he made to Ghanaians last Thursday, when he presented the state of the Nation address that government would work around the clock to ensure that there was adequate energy to account for the shortfalls that were experienced as a result of the damage to the West African Gas Pipeline.

The President appealed to Ghanaians to continue to bear with the situation as government was making frantic efforts to fix the problems in the coming months.

'I am happy that the 87 megawatts of the Aboadze T-3 Thermal Plant has started feeding into the national grid and hopefully our problems will be ameliorated by the middle of this year,' President  Mahama said.

On the death of the Naval officers, he on behalf of all Ghanaians, expressed his condolences to the bereaved families and gave the assurance that government would continue to initiate programmes that would avoid similar accidents in future.

President Mahama said government would support the security services and the illegal mining taskforce to flush out and mete out stiffer punishments to people who engage in small scale illegal mining throughout the country.

'I was so much appalled to see the extent to which the illegal miners have polluted the water bodies at Daboase water treatment plant which supplies water to a number of communities in this region, and government will initiate measures to avert their recurrence.'

President Mahama stressed that government would not deal leniently with foreigners who were engaged in the small scale illegal mining as their activities were becoming dangerous and detrimental to the survival of the citizenry.

Mr Kwaku Awortwe, Managing Director of the Volta River Authority, gave the assurance that his outfit would continue to carry out expansion projects that would provide more energy to stem the rising load-shedding situation in the country.