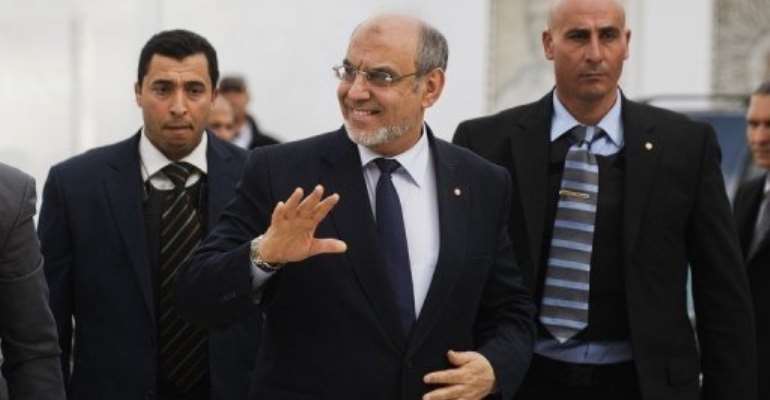 Tunisian PM Hamadi Jebali (C) waves as he arrives for a round of political talks in Carthage on February 15, 2013. By Gianluigi Guercia (AFP/File)

TUNIS (AFP) - Tunisian Prime Minister Hamadi Jebali was Monday to resume talks with political party leaders aimed at forming a new government of technocrats, despite a fresh rebuff from his own ruling Islamist party Ennahda.

Complicating a political crisis that has engulfed Tunisia following the February 6 assassination of a leftwing politician, media reports said President Moncef Marzouki's centre-left Congress for the Republic party was about to split.

Jebali, who is number two in Ennahda, was to meet party political leaders from 1500 GMT over his controversial proposal to form an apolitical party, following up talks that began on Friday, officials said.

He has vowed to step down if his initiative is thwarted, and on Monday he came under fresh attack from his own party.

"The initiative of a government of technocrats does not meet the needs of the present time," Ennahda's consultative council said in a statement.

"We remain committed to the formation of a coalition government which derives its legitimacy from the October 23, 2011 elections and would be open ... to achieve the goals of the revolution."

It urged the government to work on the basis of a "political programme that implements the transition, drafts the constitution and holds democratic elections."

Ennahda, which was repressed under ousted dictator Zine El Abidine Ben Ali, won the 2011 polls and controls the key foreign, interior and justice ministries in the coalition cabinet, as well as 89 seats in the 271-strong National Constituent Assembly.

But it is divided between moderates, among whom Jebali is the most prominent, and hardliners, represented by its head Rached Ghannouchi, who are refusing to give up the key portfolios, insisting on the party's electoral legitimacy.

Jebali proposed his initiative following a political crisis triggered by the murder in broad daylight of Belaid, a leftist opposition leader and outspoken government critic.

The family of Belaid has accused Ennahda of orchestrating his killing, which enflamed simmering tensions between liberals and Islamists in the once proudly secular Muslim nation and sparked the worst political crisis since ther revolt.

Belaid's murder came after months of failure by the ruling coalition to overhaul the government, and sparked bloody clashes between opposition supporters and police, as well as attacks on Ennahda offices.

After meeting the leaders of the main parties on Friday, Jebali said more talks on the new administration would be held Monday and that a previous Saturday deadline for its formation had been cancelled, with no new date set.

"There are huge fears that this initiative, which has the backing of most of the opposition and the public, will be buried tomorrow, plunging Tunisia into a new cycle of conflict and political wrangling," said Le Temps daily.

The media reported on Monday meanwhile that Mohamed Abbou, head of the secular Congress for the Republic, an ally of Ennahda, was defecting along with several other MPs from the party.

MPs Lazhar Chemli and Souhir Dardouri had already announced their resignations from the party, reports said.

The Congress for the Republic had emerged as the second force in the country, behind Ennahda, winning 29 seats in the assembly in the October 2011 election.

It then formed a coalition with Ennahda and Ettakatol, a centre-left secular party.

Since the uprising that toppled the regime of Ben Ali two years ago, Tunisia has been rocked by violent attacks, blamed on Salafist Muslim extremists, and social unrest over dire living conditions.