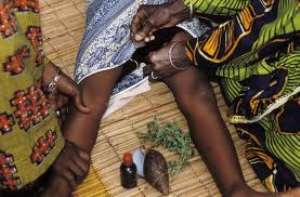 Bawku (U/E), Feb. 15, GNA - Girls in the Bawku Municipality in the Upper East Region, has called on government to intensify efforts to eradicate Female Genital Mutilation (FGM), being practiced mostly in the Northern part of Ghana.

The group, mainly school girls, said FGM and other obsolete traditional practices were affecting the physical and psychological development of victims.

They made the call in a communique' read by Miss Ralia Alhassan, a pupil of Pusiga Junior High School, during the launch of international day of Zero Tolerance to Female Genital Mutilation, organized by BElin Wusa Development Agency (BEDWA) and Action Aid Ghana, a non-governmental organisation, in Bawku.

The statement reminded Ghanaians that every child has the right to life, dignity, respect, leisure, liberty, health, education and shelter from the society.

It asked the Police, National Commission for Civic Education, Commission for Human Right and Administrative Justice and other child-rights related bodies to intensify the campaign against FGM and other obnoxious traditional practices against females.

Mr. Shiabu Abubakar, Programme Manager for BEDWA, said that FGM has affected about 140 million girls and women, and more than three million girls are at risk every year, globally.

He said that a research carried out by BEWDA and Action Aid Ghana in some selected areas in Bawku indicated that FGM was being practiced in the area.