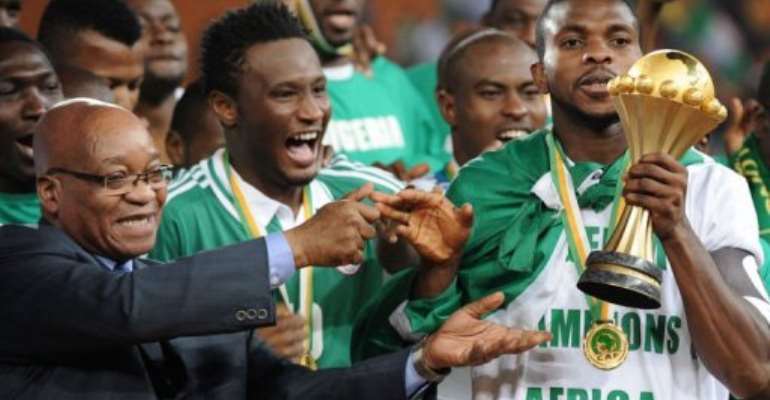 JOHANNESBURG, Gauteng (AFP) - Nelson Mandela's discharge after nearly three months in hospital showed that he had made "progress", South African President Jacob Zuma said Tuesday, adding that the 95-year-old was responding to treatment at home.

"We feel very good... that he could leave hospital which indicates the progress he has made," Zuma said.

"He remains critical but stable, responding to treatment."

It is the first time Zuma has commented on his predecessor's status since Mandela was released from hospital at the weekend.

South Africa's first black president had spent 86 days, including his birthday in July, in a Pretoria hospital for a recurring respiratory illness.

Army and private ambulances transported Mandela to his Johannesburg home on Sunday, where he will continue to receive intensive care from the same doctors who looked after him in hospital.

His home has been reconfigured to accommodate the requirements of his treatment.

But concerns linger about the health of the revered former statesman who has been in and out of hospital four times in the last year.

At one point over the last few months, the Nobel Peace laureate was said to be on life support and there were unconfirmed reports he had to be resuscitated.

Despite an upbeat mood resulting from his release from hospital, medical experts say he still faces an uncertain road to recovery.

"We acknowledge that he is old and that he is not well, but we are very happy that he has gone home," Zuma said.

Mandela has a long history of pulmonary illness and his advanced years may make recovery even more difficult, pulmonologists have warned.

"It's going to be a difficult process, he has a lot factors stacked up against him," Elvis Irusen, who heads the department of pulmonology at the University of Stellenbosch, told AFP.

Details of Mandela's recurring lung infection have been not revealed since he was admitted to hospital on June 8, fuelling speculation about his longterm health.

The presidency, in intermittent statements on the anti-apartheid icon's health, has largely described his condition as "critical but stable."

Mandela's lung problems are said to date back to his years spent in apartheid jails. In 1988, while serving a 27-year prison term, Mandela was diagnosed with early stage tuberculosis.

Two litres of fluid were drained from his chest and he spent six weeks recuperating in hospital.

Despite the experts' gloomy outlook, his discharge from hospital brought with it a sigh of relief from ordinary South Africans who have been fervently praying for Mandela's recovery.

Mandela is admired throughout the world for his lifelong sacrifice in fighting the brutal regime of racial segregation installed with apartheid in 1948.

He is also revered for his role in bringing multiracial democracy to South Africa, a country many feared would disintegrate into civil war.

He only served a single four-year term, stepping down in 1999.