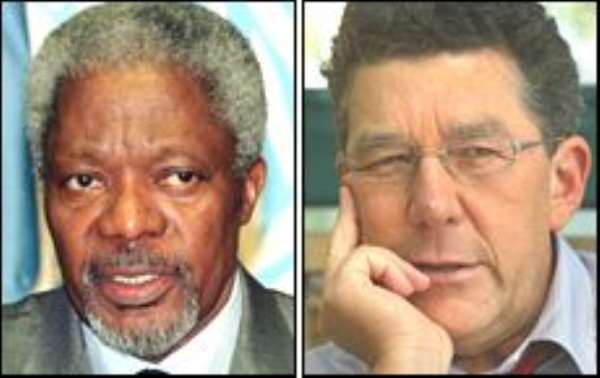 ... Producer Quits Over Annan "Darkie" Comments ... New Zealand PM condemns broadcaster's comment ... Holmes 'cheeky darkie' comments insulting and belittling ... Holmes Apologizes A tirade by broadcaster Paul Holmes during which he called United Nations Secretary General Kofi Annan a "cheeky darkie" has been condemned as insulting and belittling. During his morning breakfast show on NewstalkZB today, Holmes said the world was not going to be told how to live by a Ghanaian. Several times he referred to him as a "cheeky darkie". He was commenting on Mr Annan's warning overnight that nations could not act alone to quell the world's trouble spots. Mr Annan also warned American president George W Bush that his doctrine of pre-emptive military intervention posed a fundamental challenge to the United Nations and could lead to a global free-for-all. "That Kofi Annan, I have got to say to you, he has been a very cheeky darkie overnight," Holmes said. "It is all very well giving a darkie that secretary general's job. We will only take so much, I am sorry. We will only take so much. We are not going to be told how to live by a Ghanaian." He said Mr Annan had said the United Nations had kept the peace for 58 years. "What about the oppressed states of eastern Europe who endured the community boot for 50 years. What about half of Africa? How much peace was kept there? The nuclear bomb kept the peace for 58 years." He said Mr Annan should ask the people of Rwanda, Congo, Zimbabwe, Mozambique and the oppressed people of Africa and others how the United Nations kept the peace for 58 years. Race Relations commissioner Joris de Bres said it was a flippant description of one of the world's most outstanding citizens. "Whether he meant it in good humour or not is beside the point. "It is not a very appropriate way to describe the secretary general of the United Nations. The colour of his skin is hardly an issue." He said people concerned about the comments should complain to the Broadcasting Standards Authority. "It is a free country but people who have positions of responsibility on the airwaves should also exercise their responsibility appropriately," Mr de Bres said. "It reflects poorly not on Kofi Annan but on Paul Holmes," Mr de Bres said. Later in his show Holmes said he had received only two calls about his "darkie" comments. He said the comments were made "in anticipation of a complaint to the Broadcasting Standards Authority".