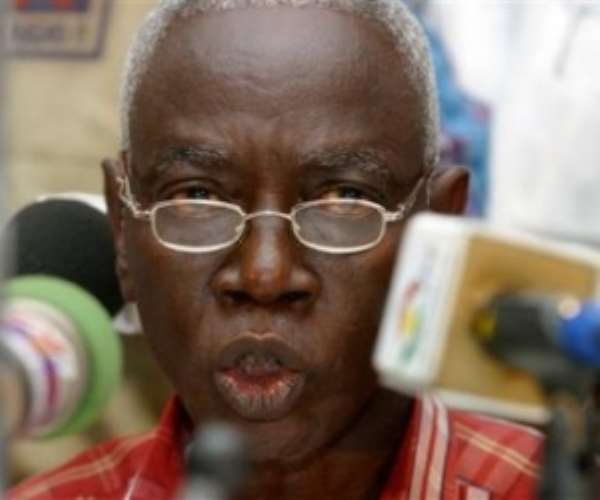 Accra, Aug. 14, GNA - A contempt application file against Dr Kwadwo Afari Gyan, Chairman of the Electoral Commission (EC) and six other officials was on Tuesday adjourned to Thursday, August 16 by an Accra Fast Track High Court.

They were accused of ignoring a writ, statement of claim, entry of appearance, motion to stay proceedings together with its affidavit and went ahead with the demarcation of new constituencies.

When the case was called, the court noted that some of the respondents had not been served hence adjourned the matter.

In an exparte-application filed by Richard Odum Bortier and Daniel Quaye, all applicants on May 28, this year commenced the action against the EC and the respondents.

In an affidavit sworn by Mr Bortier with the consent of Mr Quaye, they said the EC caused its solicitors to enter a conditional appearance, adding the entry of appearance indicated beyond all reasonable doubt that the Commission and Commissioners had, had notice of the writ and statement of claim and were ready to submit themselves to the jurisdiction of the court.

The applicants said thereafter, the EC proceeded to file a motion praying the “Honourable court to stay proceedings and refer the suit to the Supreme Court”.

They said the writ, statement of claim, entry of appearance, motion to stay proceedings together with its affidavit were all pending before the court, when they heard that the Chairman of the EC had “Evinced an intention to go ahead with the demarcation of new constituencies which he fully knew would affect the subject-matter of litigation.”

The applicants said their counsel wrote a letter to be sent to all the Commissioners of the EC, warning them that once they had become aware of the pendency of the action before the court, any conduct on their part, which is likely to prejudice a fair hearing of the case or interfere with the due administration of justice would amount to contempt for which those interested in wrong would be shown that the law is irresistible.

They said nothing was heard from the EC until July 17, when it appeared on the Order Paper in Parliament that, a Constitutional Instrument (CI) dealing with the creation of new constituencies entitled “Representation of People (Parliamentary Constituencies) Instrument 2012”.

“The said CI was prepared by the EC. The practice in Parliament, I am informed and verily believe same to be true is that only Ministers and Deputy Ministers including leadership of Majority are permitted to lay papers in Parliament. In keeping with Parliamentary practice, the Majority Leader in Parliament, Mr Cletus Avoka laid the CI in Parliament on behalf of the EC.”

The plaintiffs said to the best of their information, knowledge and belief, an objection was raised to the laying of the CI due to the pendency of the suit in court but the Speaker overruled the objection and the paper which at the time had no number was laid and referred to the Committee on Subsidiary Legislation.

Thus, CI No.76 was made by the EC and it was therefore, the EC which could be held liable for the laying of the said Instrument during the pendency of the suit No.HP9/2012 and not Parliament.

“In any case I am advised by counsel and believe same to be true that under the 1992 Constitution, Parliament cannot amend or alter the said CI. If before 21 sitting days Parliament annuls the CI, so be it, otherwise after 21 sitting days, it shall automatically become law. The said Instrument cannot be debated in Parliament, “the applicants noted.

Mr Bortier said he was advised by counsel and believe same to be true that the conduct of the respondents by causing the laying of the CI No.76 of 2012 in Parliament on July 17, more than nearly three months after the writ had been pending to the knowledge of the respondents and after their counsel had warned them of the possible citing for contempt, have tended to bring the administration of the law into disrespect or disregard and to interfere with the cause of justice or prejudice, themselves and their witnesses.

All the respondents are aware of the pendency of the suit and asking them to publish a CI, set forth the basis, process, methodology by which it created reviewed or altered the constituencies of Ghana having regard to the provisions of Articles, 47, 23 and 296 of the 1992 Constitution.

"We are further seeking an order restraining the EC from demarcating, reviewing, altering the boundaries of constituencies in future based upon the inherited formula and principles except upon publication of CI setting forth clearly the basis, process and methodology by which it did its work or as directed by the court."

The respondents, according to plaintiffs, were aware of the other relief seeking an order to restrain the EC which acts through them, from creating new constituencies except upon publishing a CI setting forth clearly the basis, process and methodology by which it did its work, yet the Commission acting through the respondents had proceeded to create new constituencies with abandoned non-chalance which conduct was aimed at prejudicing and interfering with the administration of justice.

“They intend to obstruct the work of the court and deserve nothing short of imprisonment, which course alone in the circumstances can purge their contemptuous behaviour,” the plaintiffs said.

We’re passing a law to nib LGBTQI+ activities in the bud — B...
20 minutes ago