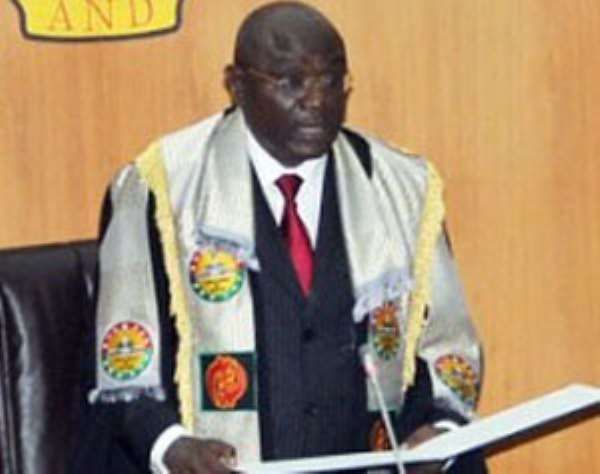 MEMBERS OF Parliament have deserted the House for three consecutive sittings, abruptly bringing the business of the legislature to a standstill.

Only 40 MPs were present in the House's chamber as at about 11:15am yesterday, a situation which compelled a highly enraged first Deputy Speaker, Edward Doe Adjaho, who was presiding over proceedings, to adjourn sitting because there was no quorum.

'People who are fighting day-in-day-out to become MPs to represent their constituents should know that they owe it a duty to attend upon the House to conduct business', Adjaho lamented, adding that the 'rules are very clear; I have no option but to adjourn sitting'.

However, some MPs from the minority caucus were surprised that members of the governing National Democratic (NDC) were no longer interested in conducting government business in the House.

Minority Spokesperson on Constitutional, Legal and Parliament Affairs, Joe Ghartey, who is also the MP for Esikadu/Ketan, told  DAILY GUIDE  that it was the duty of the majority side to ensure that parliament had a quorum, particularly in this election year.

'The majority should help us have a quorum. They should not only come to the House when it is time to vote on issues such as the STX Housing deal,' Joe Ghartey stated.

When the issue of the quorum was raised last week, Majority leader Cletus Avoka explained that members were not in the House because some of them had travelled for the inauguration of the new district assemblies.

Yesterday's adjournment followed submissions by MP for Akim Abuakwa North, Prof. (Emeritus) Samuel K. Amoako, that the House did not have a quorum to transact business.

It was the third time the issue of the quorum was raised by Prof. Amoako, who quoted standing order 48 of Parliament to support his position.

Standing Order 48 (1) states that 'the presence of at least one-third of all the members of parliament besides the person presiding shall be necessary to constitute a quorum'.

'If at the time of sitting, a member takes notice or objection that there are presence in the House, besides the person presiding, less than one-third of the number of all the members of parliament, and after an interval of 10 minutes a quorum is not present, the person presiding shall adjourn the House without questions put until the next sitting day'.

Consequently, passing of the Public Health Bill could not be done yesterday as scheduled because of the lack of a quorum.

MP for Old Tafo, Dr. Anthony Akoto Osei, expressed his displeasure about the absence of the Health Minister and his deputy to assist the House to pass the bill.

'I do not understand why the Minister of Health or his deputy is not in the House to move the motion for the third reading of the Public Health Bill. The matter before us is not important to them', Dr. Akoto Osei, who is also the minority spokesperson on finance, remarked.

The other issue that had been pending in the House since last week had been a credit facility agreement between the Government of Ghana and the Fidelity Bank Limited for an amount of Ghana cedis equivalent to â‚¬24.11 million to purchase the remaining two out four MI-171 SH helicopters for the Ghana Air Force.