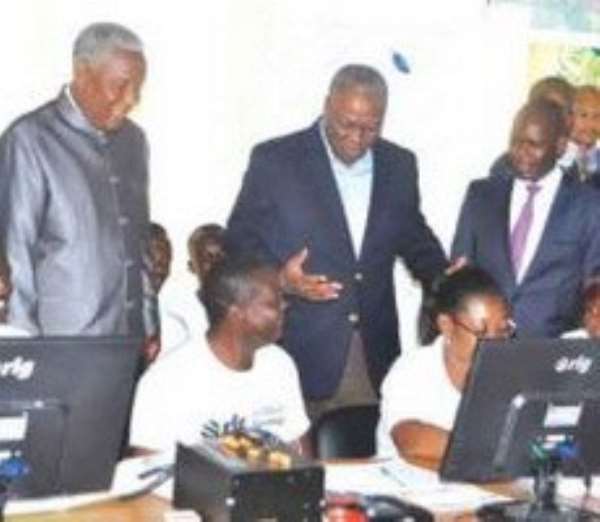 The Vice-President, Mr John Dramani Mahama, has charged public and private institutions to stop discriminating against persons with disability (PWDs) in the engagement of workers, indicating that such discrimination is “illegal, immoral and unacceptable”.

He said there had been instances when PWDs with better qualifications had been denied jobs on the basis that they were disabled.

Instead, he said, the jobs had been given to able persons with lower qualification.

“When PWDs go for job interviews, they can have better curricula vitae (CVs) but as soon as employers realise that those they are interviewing are disabled, they are discriminated against,” he said.

Mr Mahama made the call yesterday when he launched an Information and Communications Technology (ICT) training programme initiated by the Ministry of Employment and Social Welfare and rlg Communications for PWDs in Accra.

He used the occasion to inaugurate an ICT training centre for the programme at the Accra Rehabilitation Centre.

Under the GH¢21 million programme, 5,000 PWDs nationwide will be trained in ICT, mobile phone and computer repairs for six months. The government is contributing GH¢19 million, while rlg is supporting with GH¢2 million to cater for the tuition fees and transportation allowances for the trainees.

After the training, the graduates will be engaged as instructors at the various resource centres and for mobile phone and computer repairers in the districts, while others will be assisted to set up shops to sell and market rlg products.

The Vice-President said PWDs were not created to be beggars on the streets, basket weavers or shoe makers and that they could do the same work as able persons and even do it better, since “disability is not inability”.

He noted that some parents forced their disabled children to drop from school and allow the able ones to continue in order to save cost and asked those parents to refrain from that unacceptable move.

On the training, Mr Mahama said “the world is changing and becoming modern”, hence the need to equip PWDs with ICT skills to fit into the job market.

He said the days when PWDs were trained only in basket weaving and shoe making were gone and indicated that “we need to change the kind of training given to PWDs”.

He said the government intended to train about 20,000 PWDs countrywide by the end of 2013.

The Minister of Employment and Social Welfare, Mr E.T. Mensah, said the ICT training for PWDs was in line with the government's key pillar of investing in people, since that was the only way the people could realise their potential.

He said PWDs were to receive ICT training that would make them marketable on the labour front and afford them the opportunity to lead decent lives.

The Chief Executive Officer of rlg Communications, Mr Roland Agambire, said the training of the PWDs fell in line with the company's determination to revolutionise ICT in Africa and create one million jobs for the youth in the world.

He said it was the desire of rlg to give decent jobs to at least 30 per cent of the four million PWDs in the country and indicated that the graduates would become technicians, engineers and sales representatives.

Mr Agambire announced that rlg would soon cut the sod for the construction of a technology city modeled along the lines of Silicon Valley in California, USA, to enable the company to realise its dream of creating one million jobs.

The Board Chairman of the National Council for Persons with Disability, Mr Andrew Okaikoi, said the ICT training would “enhance job opportunities for PWDs in today's technology-driven world”.