NPP KICKS OF EUROPE CAMPAIGN IN THE HAGUE 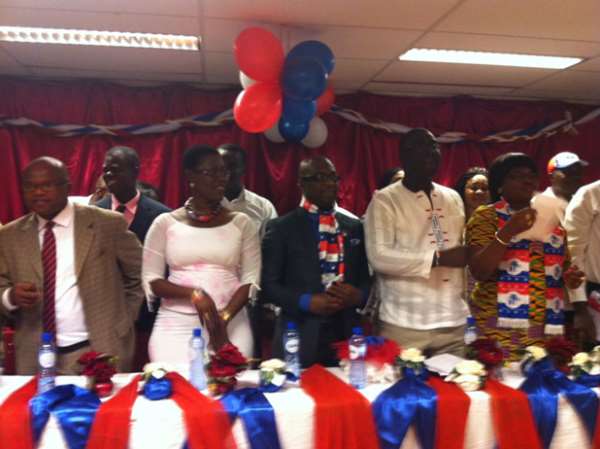 The New Patriotic Party The Hague Chapter in the Netherlands was host to the 2012 NPP's Europe Campaign Launch at the weekend, with high profiled dignitaries from Ghana in attendance. This included Nana Obiri Boahen, former Minister of State at the Interior Ministry, Nana Atto Arthur, former Central Regional Minister, Hopeson Adorye, a member of the NPP National Communication Team, Sammy Awuku, Deputy Communications Director and Guest Speaker at the event and Ms. Ursula Owusu, NPP Parliamentary Candidate for the Ablekuma South Constituency who was the Guest of Honor for the Event. aimed at helping the party recapture power in the December 2012 Elections with a fundraising event. Many NPP supporters and Ghanaians in Belgium, Germany, the United Kingdom, Holland and rest of Europe, converged in The Hague for the launch. The event was also used to raise funds to support the party's campaign in Ghana had Mrs. Emilia Akoto Dapaah of Sennelloyed co. Ltd. as the Chairlady for the fundraising.

The Chairman of the NPP Chapter in the Hague, Mr. Kwabena Opoku Agyemang, and the outgoing National Chairman of NPP-Holland, Mr. Kobby Annan both took turns to commend the participants from across Europe for their commitment to the course of the NPP and also thanked all members and sympathizers of the NPP in Europe for the support and the commitment they had shown to the Party over the time.

Mr. Kobby Annan said the event was to send a clear message to the NDC that Ghanaians abroad demand free and fair elections in Dec. 2012 and called on the international election observers to double their monitoring machinery in Ghana this year. He asked members to contribute financially to motivate the party's men on the ground stand shoulder to shoulder and side by side to confront whatever tactics the NDC might employ in the election year.

The two chairmen used the opportunity to call for unity and hard work towards the December 2012 General Elections and also expressed the optimism that if all within the NPP fraternity contributes his or her their widows mite to the course of the Party in this crucial election year, it would be easier for the Party to pull resources together both human and material to ensure that the Party secures a massive victory come December.

Nana Ato Arthur and Nana Obiri Boahen both recounted the deplorable state of affairs back home in Ghana and also promised in their own capacity to push for Ghanaians in the diaspora to enjoy their democratic right to a franchise when the NPP is voted into power by ensuring that the Representation of the People's Amendment Law is enforced to the latter.

Nana Ato Arthur stated that as he feels very much ashamed at the poor leadership and disastrous incompetence of his brother from the central region and indicated that many of Ghanaians from the region had regretted voting for Prof. Mills and are more than determined to vote for Nana Addo to deliver the quality leadership that can transform the lives of the ordinary Ghanaian.

Hopeson Adorye, a member of the NPP's National Communication Team also spoke about the state of affairs in Ghana citing the heavy corruption that has engulfed the Mills/Mahama administration, the unprecedented payment of judgment debts and the falling living standards in Ghana. Hopeson urged all NPP supporters, sympathizers and members to be ready to meet the NDC “bumper to bumper” in whatever form necessary.

Sammy Awuku in addressing the gathering spoke about the unprecedented lies, the unprecedented broken promises, the unprecedented judgment debt payments and the crass corruption that according to him, the Mills/Mahama administration seemed to have entered a civil partnership with in a marriage of convenience. He also mentioned the high cost of custom duties at Ghanaian ports which has put many Ghanaian importers off. He touched on the high cost of living and urged Ghanaians in the diaspora not to turn their backs on their brothers and relations in Ghana in these very trying times.

Sammy Awuku stated that the Mills administration had collapsed almost all the sectors of our economy and that Ghana was fast heading for slaughter at the abattoir but that it was good news that Ghanaians were ready to put a halt to this backward trend in December when the incompetent Mills/Mahama administration is booted out.

The Guest of Honor for the event, Madam Ursula Owusu paid glowing tribute to the organizers of the programme and all NPP supporters in Europe for their determination to stand up and support the NPP and to an extent all Ghanaians in these trying times.

Ursula also touched on the endemic corruption, the high cost of living and the politics of intimidation and fear that the government of John Mills and John Mahama had instituted and also indicated that the current government had little respect for women in politics and Ghanaian women generally. The NPP Parliamentary Candidate for Ablekuma South added that the attitude of the NDC in the biometric registration was a dress rehearsal for the plans the NDC has to unleash in the December elections. She admonished the diaspora to use their influence to convince their relations in Ghana to support and vote for the NPP in December to deliver good governance and raise the standards of the Ghanaian significantly with good leadership and vision.

Dr. Kwasi Boahene led the fundraising segment to merchandise party paraphernalia which saw the Belgium delegation stealing the Show of the Night with special contributions amid dancing. The event was climaxed on Sunday with a Thanksgiving Service at the Rhema Gospel Church in The Hague. The participants have since left for their respective countries.