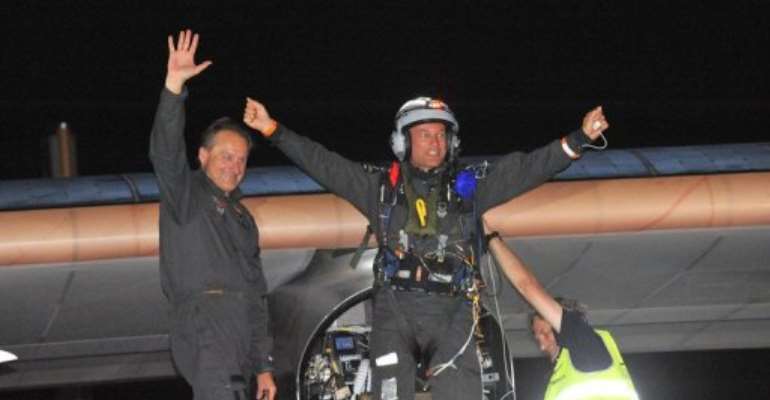 RABAT (AFP) - Swiss pilot and adventurer Bertrand Piccard has flown his way into the record books again after completing the world's first intercontinental flight in a giant solar-powered plane.

Piccard, a 54-year-old balloonist, landed in the Moroccan capital Rabat under a full moon late Tuesday after completing the 19-hour voyage from Madrid on his experimental carbon-fibre aircraft.

Dozens of people, including his wife Michele as well as flight organisers and Moroccan officials, gathered on the runway in Rabat to witness the touchdown of the Solar Impulse after it crossed the Strait of Gibraltar.

Piccard, who made the first non-stop around-the-world balloon flight 13 years ago, thrust his fists into the air as he emerged from the Solar Impulse, an aircraft as big as an Airbus A340 but as light as an average family car.

"Simply the flight over the Gibraltar Strait was a magical moment and represents one of the highlights of my carrier as an aeronaut," Piccard said as the ground crew opened the cockpit.

To qualify as an intercontinental flight, Piccard had only to cross the Strait of Gibraltar -- 14 kilometres (nine miles) at its narrowest point -- from Europe to Africa.

"Solar Impulse has demonstrated that a solar-powered airplane can fly day and night using no fuel. The next challenge is to fly around the world," the organisers said on their website solarimpulse.com.

Piccard took off from Madrid before dawn for the 830-kilometre (over 500-mile) flight and needed an oxygen mask to breathe in the freezing high altitude as he soared to a maximum height of 27,000 feet (8,230 metres).

"For one hour I had the full moon on my right and I had the sunrise on my left and that was absolutely gorgeous," Piccard told AFP in an interview from the cockpit shortly after setting out from the Spanish capital.

"I had all the colours of the rainbow in the sky and also on the ground."

An onboard video camera relayed images of the distant patchwork of fields and valleys stretched out below the aircraft, which has 12,000 solar cells in the wings turning four electrical motors.

The crossing of the Gibraltar Strait was one of the most challenging points of the voyage because of the need for oxygen and temperatures that can sink as low as minus 29 degrees Celsius (minus 20 degrees Fahrenheit).

Solar Impulse will stay in Rabat for five days before taking off for Ouarzazate in the south of Morocco for the launch by King Mohammed VI of construction of the largest-ever solar thermal plant.

Each of the motors on the craft -- which has a wingspan of over 63 metres (over 200 feet) -- charges 400-kilogramme (880-pound) lithium polymer batteries during the day, allowing the aircraft to carry on flying after dark.

"The question is not to use solar power for normal airplanes," said Piccard, whose grandfather was the inspiration for the Professor Calculus character in the Tin Tin comics.

"The question is more to demonstrate that we can achieve incredible goals, almost impossible goals, with new technologies, without fuel, just with solar energy, and raise awareness that if we can do it in the air, of course everybody can do it on the ground," he told AFP in Madrid.

Piccard, who made the world's first non-stop around-the-world balloon flight in 1999 together with Briton Brian Jones, took over the plane's controls from project co-founder Andre Borschberg.

Borschberg, a 59-year-old Swiss executive and pilot, flew a first leg from Payerne in Switzerland, landing in Madrid on May 25.

The voyage, 2,500 kilometres (1,550 miles) overall, is also intended as a rehearsal for Solar Impulse's round-the-world flight planned for 2014.

The aircraft made history in July 2010 as the first manned plane to fly around the clock on the sun's energy. It also holds the record for the longest flight by a manned solar-powered airplane after staying aloft for over 26 hours above Switzerland, also setting a record for altitude by flying at 9,235 metres (30,298 feet).