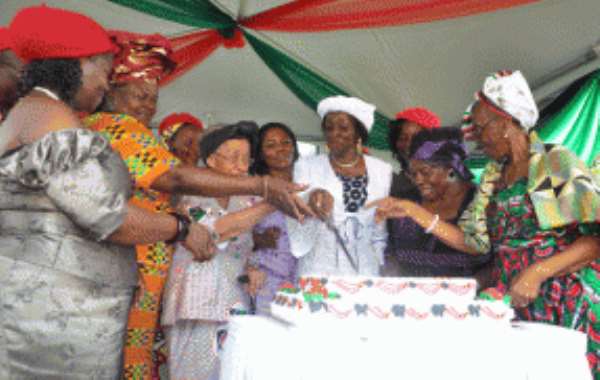 Nana Konadu Agyeman Rawllings (middle) President of 31 DWM being assisted by some executive members to cut the 30th anniversary cake at the Golden Tulip Hotel in Accra. Others in the picture include Dr Mary Grant (3rd left) a former Health Minister and Rev. Christy Doe Tetteh (2nd left) of Solid Rock International Church.

He said when the NDC was established, the huge network created by the DWM served as a powerful avenue for propagating the government's philosophy and ideals and was also an influential machinery that hoisted the party's image from 1992 through to 2008.

Speaking at a ceremony to mark the 30th anniversary of the 31st DWM at the Golden Tulip Hotel in Accra, President Rawlings stated: “The current leadership knows it very well but rather than building on the capacity that the movement brought to the party, they have chosen to exclude them and do worse than our so-called opponents were doing between 2001 and 2008.''

“How can the government, in its desire to hold onto political power, demean itself in such a crass manner? How can an NDC government lose its enviable sense of political morality and moral high-ground? Can we sustain hope and strength on this depraved political atmosphere?'' he asked.

The occasion brought together representatives of the DWM from all the 10 regions of the country.

The DWM was launched in 1982 by former First Lady, Nana Konadu Agyemang Rawlings, to increase women's participation in the decision-making process in the country.

“We have always had to fight against one enemy or opposition. If they can behave in a civil way, it will be fair to call them opposition, but seeing how they rounded up and jailed innocent people and killed others, can we be wrong to sometimes describe them as enemies?

“This time, however, we are fighting against two enemies — one the perceived enemy and the other one the traitor. We cannot fight both at the same time and therefore, one has to go,'' the former President said.

He said some Ghanaians were justified in saying that those in office were not genuinely minded towards national issues because of the decision by some leading NDC members to destroy the party in their favour.

According to him, the transformation of the Ghanaian economy and the current state of women in the country were the result of what he described as selfless and passionate appeals made by the DWM.

“When the NDC was established, the huge network created by the movement served as a powerful avenue for propagating the government's philosophy and ideals,'' he said.

“The DWM stood up for the disadvantaged women of society and together they worked hard in creating modest economic opportunities for women, created awareness of women's right and inculcated a sense of self-confidence and self-worth that has today made Ghanaian women strong, assertive and equal to men in every sector of society,'' he contended.

Former President Rawlings said it was the DWM's achievements that men were parading and strutting the corridors of power taking credit for.

For her part, Nana Konadu Agyeman Rawlings urged women not to be satisfied with the current achievements chalked up in the past three decades but rather work harder to ensure that women in the country were recognised as equal partners in the building of the nation.

“Ghanaian women will never go back to what we were in 1982. We have changed and we have changed for the better. We are confident; most of us know what we want. Even when we face difficulties, we approach them head-on because we know it is possible to achieve our goals.

“Our work is far from over, even though we have hundreds of thousands of women who are self-employed and, hence, are contributing to their household's income,'' she said.

Outlining some of the achievements of the DWM, the former First Lady said the movement had provided potable water in several communities, trained traditional birth attendants and educated women on population, family planning, maternal health and childcare issues.

“We initiated our women in a tropical forestry development project with the ITTO so that women can play an active role in preserving our forest areas,” she added.

Mrs Rawlings observed that although the DWM had faced enormous challenges, it could boast of transforming the mentality of Ghanaian women.