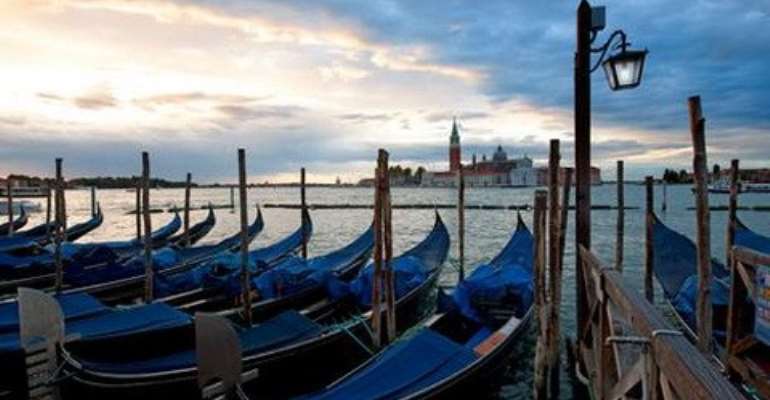 The gondolas bob on the water as the sun sets over Venice. (Pete Seaward)

Save for an obsession with cups of tea and apologising, nothing defines English culture more than William Shakespeare. Yet truth be told, the Bard had split loyalties. While many of his 38 plays were set in 'this sceptred isle' of Britain, 13 of them were based or part-based in the sunnier climes of Italy.

From the lovelorn streets of Romeo and Juliet's Verona and Julius Caesar's murderous machinations in Rome, to the frothy mix of sex, money and intrigue in Othello's Venice, Shakespeare's fascination with Italy is a constant undercurrent of his work. His Italian settings are so crucial to his plots that they have become characters in their own right – and his influence can be felt in Italy today.

Who better to explore that continuing influence than Francesco da Mosto, a Venetian writer, architect and the presenter of new BBC series Shakespeare in Italy? Francesco believes that Shakespeare set some of his plays in the country so that he could tackle sensitive political topics without risking the displeasure of England's rulers. 'In Shakespeare's time, Italy was a place where anything could happen', he says. 'It contained both warring city-states and sophisticated political entities like the Venetian Republic. By setting his plays in Italy, Shakespeare could deal with issues – including political assassinations such as the one in Julius Caesar – that would have landed him in trouble if he'd set them in England.'

Shakespeare wasn't averse to pinching a few ideas from Italian writers, either – some people have made claims that he might have been Italian himself. 'Many of Shakespeare's ideas came from Italian stories called 'novellas',' explains Francesco. 'The Merchant of Venice was based on an Italian story about a money lender, while the names Romeo and Juliet may have been taken from poet Luigi Da Porto. But Shakespeare was much more than a copycat. His genius lay in the way he re-elaborated other stories.'

So, without further ado about nothing, here is a guide to some of William Shakespeare's favourite Italian cities – the grand northeastern trio of Verona, Padua and Venice.

Verona
'In fair Verona, where we lay our scene' - Romeo and Juliet

Verona – a wonderful city surrounded by hills arranged like banks of theatre seats – is the city in which Shakespeare's legacy is felt strongest. There is a saying in Italy that 'Venetians are great lords, Paduans are great doctors, people from Vicenza eat cats [during wartime, allegedly] and people from Verona are all crazy'. People from Verona are full of life, very funny and welcoming, a curious breed who love to meet visitors and appreciate new influences.

Verona was not thought of as a city of romance before Romeo and Juliet – in fact, not many people would have heard of it as it was very much in the shadow of Venice at that time. It is now regarded as one of the most romantic places in the world, and thousands of lovers visit the city each year.

We don't know whether Romeo and Juliet existed, although Italian poet Dante did mention two feuding families, called the Montecchi and the Cappelletti. But it's irrelevant – in every one of us there is a Romeo or a Juliet. When we fall head over heels in love, nothing matters more.

The city is full of sites associated with Romeo and Juliet. The famous balcony where Romeo is said to have declared his love to Juliet is close to Verona's main promenade – although since the balcony was apparently added to a suitably old house in 1936, it's doubtful it is the original! There is a statue of Juliet outside and her bedroom has been recreated inside (Via Cappello 23, 00 39 045 803 43 03). The stone architecture of the building's courtyard, entered through a little arched passageway, has kept the otherworldly atmosphere of ancient times.