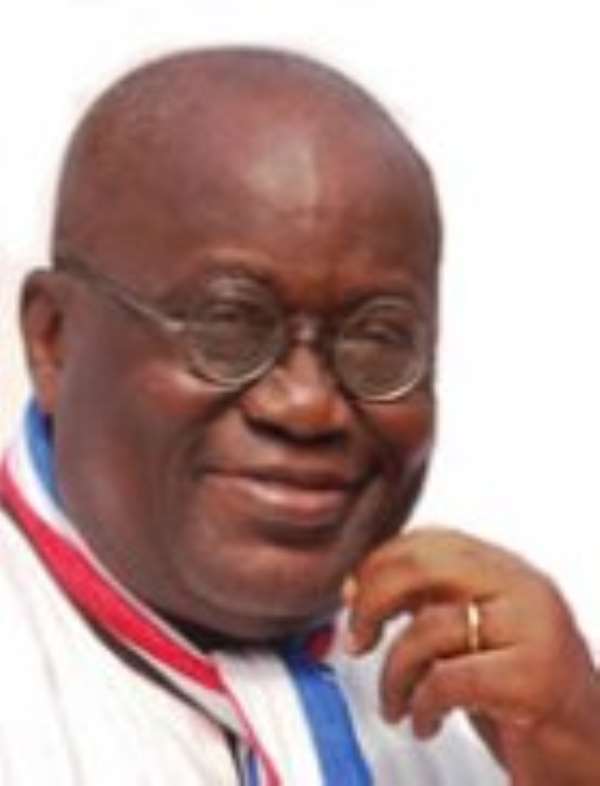 Nana Addo Dankwa Akufo-Addo - NPP Flagbearer The flag bearer of the New Patriotic Party notes that the inability of the party to make marked electoral success in the Volta Region had been due to communication failure.

“I prefer to believe that our inability to jump the electoral hurdle in the region has been because we in the NPP have not done a good job at communicating our message. I say this because I know that the NPP message ought to have fertile soil in this region”, Nana Akufo-Addo contended.

But he admits that beyond the programmes and policies of the NPP to develop every part of the nation, the posture, attitudes and utterances of party members were critical to developing the “hopefully growing bond between the NPP and Voltarians”.

Nana Addo made these observations when he addressed the Volta Regional House of Chiefs (VRHC) at the 2nd general meeting of the house in Ho.

His visit to the VRHC forms part of his move to pursue the course of peace and unity in the run up to the December, 2012 general election.

Nana Addo who was accompanied by his wife, Rebecca, and other party functionaries said that it was a well-known fact that the NPP had not fared well in the region but added also that the Volta Region was one of the four regions where the NPP’s share of votes had been consistently rising since 1992.

“Indeed, the NPP got its highest share of popular vote in the Volta Region in 2008, when I was first nominated to lead my party in the presidential race. So, I think it would be fair and modest for me to say aloud that the Volta Region has done enough to prove to me, my party and the rest of the country, that she is willing to adopt me as a true son”, he said.

What was left for him to do, he said, was for him to show that he sought a genuine relationship with the region through his vision, commitment and programmes, saying “thankfully for me, the good works of the last NPP government in not discriminating against this region, or any other region for that matter, offers a convenient start for me. It is evidence of our sincerity and determination to build a society of aspirations and opportunities for every Ghanaian, regardless of his or her geography, ideology or biology”.

Touching on the need to protect the unity of the nation, he said that it was a celebrated fact that Ghana stood tall among nations as having a rich society of diversity, tolerance and co-operation.

“Ours is a society of multi-ethnic and multi-religious diversities who have found the wisdom to live in peaceful co-existence. What is left, however, is how the leaders of this nation of manifest destiny can use the prevailing atmosphere of peace, unity, diversity and harmony to enhance the dignity and prosperity of every Ghanaian”, he opined.

He said, there was the need for a healthy competition between political parties to give Ghanaians a choice between a different set of ideas on how to develop the nation but that should be nothing more or less than a competition of ideas, commitment, competence and solutions, adding that “this competition should never endanger the Ghanaian project”.

“Our prejudices hold us back like iron chains when they stop us from recognis ing opportunity when we see it. We must be proud to celebrate our differences and even share the occasional harmless joke about where we are coming from, but we should never allow the richness of our differences to become a currency of spite and hate”, he urged.

He said that it had become clearer during his Tour of Hope that Ghanaians were hungry for a message of hope and unity and for a leadership that will deliver security and prosperity.

“There are bound to be differences of opinions among us, but these differences of opinion should not shake our allegiance to Ghana. Ghana must be first and foremost in all our dealings and thinking. Our nation’s peace, stability, freedom and democracy are more important than anyone’s ambition, including my own”, he emphasized.

On the recent statement made by the Member of Parliament for the Assin North Constituency, Mr Kennedy Agyapong, while he was away in the United States, he said that he fully endorsed the sentiments expressed by the party which binds all members of the NPP.

“I want to say, here and now that I am unequivocally committed to peace in our country. That is why in 2008 when I lost the presidential election by the smallest margin in our political history, and indeed in the history of Africa, I accepted the verdict of the Electoral Commission without demanding a recount or inciting my supporters, and thereby avoiding the spilling of even a single drop of Ghanaian blood. My resolve remains the same today”, he said.

He also touched on his campaign issues of Education and Skills, Job Creation, Agriculture and Transformation of the Economy.

When the floor was opened after his address for questions and comments, the Fiaga of Klikor Traditional Area, Togbui Addo VIII, said that every flag bearer was a potential president with higher probability for the NPP and NDC, and therefore admonished the NPP flag bearer to bring to order any member of their party that attempted to foment trouble.

The queens of the Volta Regional House of Chiefs called for a halt to the practice where politicians hurled “dirty” words at each other and pleaded for peace, saying they had nowhere else to go but Ghana.