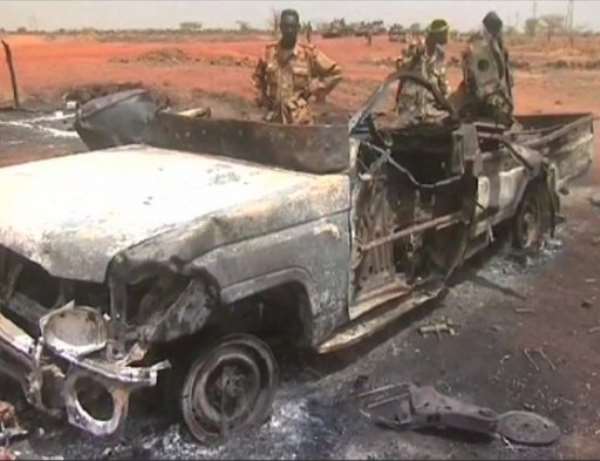 After reaching the Ethiopian capital they held talks with the mediator, former South African president Thabo Mbeki, and other members of the African Union (AU) which is leading the talks at a luxury hotel.

But they had yet to meet their South Sudanese counterparts.

Al-Obeid Meruh, Sudan's foreign ministry spokesman, told AFP that the delegation decided to travel to Addis Ababa, after a delay, once the AU informed them that the South Sudanese delegation had arrived the day before for the talks focused on security.

Early on Saturday Meruh said combat on Friday over the strategic town of Talodi, and allegations of a troop buildup south of Heglig, had held up the Sudanese ministers' trip and raised doubts as to whether the negotiations could proceed.

The talks were called after international alarm and fears of a wider war following fighting between troops from the north and South last Monday and Tuesday around the Heglig oil region on the disputed border.

Sources close to the talks confirmed technical-level meetings had been going on since Wednesday.

"We are ready and prepared to discuss the (issues) if our counterparts can just come to Addis," South Sudan's Foreign Minister Nhial Deng Nhial told AFP in the Ethiopian capital.

Along with Nhial, Juba's ministers of defence, justice and parliamentary affairs were at the meeting venue, as was their chief negotiator Pagan Amum.

While the talks proceeded in Addis Ababa, the Sudanese army spokesman, Sawarmi Khaled Saad, alleged late on Saturday that a battalion of South Sudanese troops had crossed the contested border and was moving towards Talodi.

This followed the army's accusation late on Friday that South Sudan backed with cannons and tanks a rebel attack on the town, in South Kordofan state about 50 kilometres (30 miles) from the nearest point on the unclear frontier.

The army said it repulsed the attack but the rebels were building up forces elsewhere because their leaders "and South Sudan want to continue their attack on Talodi."

Insurgents from the Sudan People's Liberation Movement-North (SPLM-N) said a battle for the town raged into the night and on Saturday.

"Our forces managed to go inside the town but still the fighting is going on," said Arnu Ngutulu Lodi, the rebels' spokesman.

He described as "war propaganda" the army's claim that a Southern battalion had moved into the area.

The Sudanese army also alleged South Sudan and rebels of the Darfur-based Justice and Equality Movement were building up forces south of Heglig in preparation for another attack.

JEM rebels denied any involvement in the previous Heglig fighting.

Border clashes occurred in the Heglig region between troops of the north and South on Monday and Tuesday in the most serious violence between them since South Sudan's independence last July.

The AU, UN Security Council and European Union all called for an end to the fighting.

US Secretary of State Hillary Clinton blamed Khartoum for most of the violence, citing its aerial bombing as "evidence of disproportionate force."

The fighting led Sudan to call off a planned April 3 summit between the presidents of the two nations.

"No matter what happens in the field, on the ground it should not affect the parties' commitment to negotiate," Nhial said.

Analysts said there are elements in Khartoum, as well as the South, opposed to recent moves towards warmer relations between the two countries and suggested the flare-up over Heglig was an effort to sabotage a rapprochement.

Ethnic minority insurgents from the SPLM-N -- who have been battling Khartoum since June -- fought alongside the former rebels now ruling South Sudan, which separated last year after an overwhelming vote for secession following Africa's longest war.

Border tensions have mounted since then and Sudan has previously accused the South of supporting the SPLM-N, a charge denied by the government in Juba.

If you repeatedly offend your gods, they'll kill you - Chief...
41 minutes ago