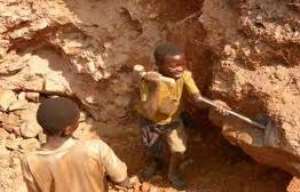 Likpe-Bakua(V/R), March 15, GNA - Mr Antwi-Bosiako Sekyere, Deputy Minister of Employment and Social Welfare on Wednesday has said prudent policies and programme interventions championed by the government and its development partners have justified the removal of the country from a list of comity of states labelled as exploiting child labour in the cocoa sector for economic gains.

He said the United States Department of Labour's Executive Organ 126 excused the country from such labelling in 2010.

Mr Sekyere indicated this at the national launch of the Ghana National Child Labour Monitoring System (GCLMS) under the National Programme for the Elimination of the Worst Forms of Child Labour in Cocoa (NPECLC) at Likpe-Bakua in the Hohoe Municipality on Thursday.

The GCLMS is a pilot and holistic, timely, accurate, appropriate and sustainable intervention to obtain comprehensive information on all children in or at risk of child labour and its worst forms (WFCL) in cocoa growing areas.

He however said the country had been categorised among the comity of states still exploiting child labour in the fishing, mining and quarry industries.

Mr Sekyere called for a head-on tackling of the awful phenomenon and entreated stakeholders to redouble efforts at eradicating the scourge, who's underlying factor is poverty.

He noted that government's pro-poor interventions including the capitation grant, school feeding programme, free school uniforms and exercise books were targeted at cushioning and comforting households with extreme poor situations.

The Deputy Minister indicated GCLMS had been well-crafted to track children in their locality and urged parents/guardians, traditional authorities as well as Metropolitan, Municipal and District Assemblies to embrace the initiative.

Professor Richard Bani, National Programme Manager of GCLMS/NPECLC said his outfit would support the nation's efforts to meet its obligations under the ILO Convention 138 and 182 through a four-pronged approach, namely GCLMS, monitoring and evaluation, remediation and communication.

Prof Bani said 30 communities in the six cocoa growing regions would benefit from the successful implementation of the pilot scheme.

He said it was envisaged that the WFCL in the cocoa sector of the country would be reduced by 70 per cent aggregate through joint efforts by key stakeholders.

Mr Stephen McLelland, a representative of ILO said the progress of Ghana's experience towards the elimination of child labour in the cocoa industry was expected to be replicated in the ECOWAS region.

Ms Melain Boyz, representative of chocolate industry in the United States said a memorandum of understanding was signed between industry members and the government of Ghana to that effect and applauded the MESW for their resolve to reduce the menace.

She said two-million dollars had been committed to champion the fight.

Dr Mrs Margaret Kweku, Hohoe Municipal Chief Executive said the initiative was relevant and appropriate, coming at the heels of the classification of the country in the comity of listed countries who patronized child labour.

She said the exercise would enhance the data base of the Assembly and pledged its total support.

Nana Kwadzo Amoah VI, Chief of Likpe-Bakua said some amount of child labour was needed to transfer knowledge but agreed that the worst forms should be eradicated.

He was optimistic that the initiative would compel parents to redouble efforts at educating their children to the benefit of community and state for accelerated national development.