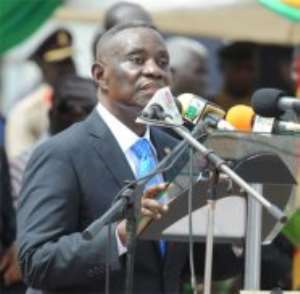 “There is nothing we cannot achieve as a people united in pursuit of a common purpose,” he said in his address to a parade of school children and security personnel at the Indepence Square in Accra.

President Mills said the independence day continued to be a constant reminder that with determination and hard work Ghanaians could grow the country without depending on others.

The theme for the occasion was: “Sustaining Peace and Unity for Democracy and Development”

A contingent of 1,200 teachers and students as well as 48 officers, 900 men and women of the Ghana Armed Forces were on parade which was under the command of Col. J.W.K. Asabre.

The participants at the parade marched pass in slow and quick paces to the admiration of the cheering audience.

The President began his 10-minute speech, which received intermittent applause, by requesting a minute’s silence in memory of 14-year-old Goni Etornam of the Ho Fiave Seventh Day Adventist Junior High School, who passed away while joining her school mates to rehearse for this year’s anniversary parade.

President Mills said the independence day should also remind the people that given the opportunity, the African was capable of managing his or her own affairs and rising to the very top.

“This 55th indepence day will be meaningless if it is not linked to our collective resolve to join forces in ensuring that nothing is done to whittle away the sweat, blood and toil of those who have made it possible for us to be where we are today.

“Today is a time to celebrate the very essence of our Ghanaian heritage and the things that have not only defined us as a people, but also inspired countless numbers across the world”, he said.

On this year’s election, President Mills affirmed his commitment to ensuring that the nation remained peaceful before, during and after the event.

“As President and Commander-in-Chief of the Ghana Armed Forces, I pledge to ensure that Ghana remains peaceful before, during and after this year’s election.

“As a nation, we have no other option but to sustain the peace we are enjoying in order to broaden the frontiers of our democracy and development. Our fallen heroes and founding fathers toiled to give us this dear nation and we dare not destroy what they have toiled to build”, he said.

The Presiddent said he was encouraged by the active nature that the youth partook in the parade every year, and expressed the hope that they were filled with big dreams of taking over from the adult population and becoming responsble adults.

He, particularly, urged the youth to love their country, work hard and not give up in the face of challenges.

President Mills further charged all Ghanaians to strive to build a better Ghana “in which the dreams of our children can become a reality.”

“The best we can do is to contribute our quota to building that better Ghana so that the coming generations will remember us for adding to the legacy of the founding fathers, and not remember us for destroying their heritage”, he stressed.

President Mills saluted Dr Nkrumah, Sergeant Adjetey, Corporal Attipoe, Private Odartey-Lampety, Nii Kobla Bonne, and all the gallant men and women who fought to make it possible for Ghanaians to celebrate the day.

He said the candle that was lit 55 years ago by Dr Nkrumah continued to glow across Africa and worldwide, a sacrifice and contribution which had been recognised by the African Union by mounting his magnificent statue at the forecourt of the new edifice of the union in Addis Ababa, Ethiopia.

The President saluted the students, teachers, labourers, market women, drivers and indeed every Ghanaian past and present, who had contributed and continued to contribute to the growth and development of the country.

Teachers Are Better Off Under NPP Than NDC — Education Minis...
52 minutes ago