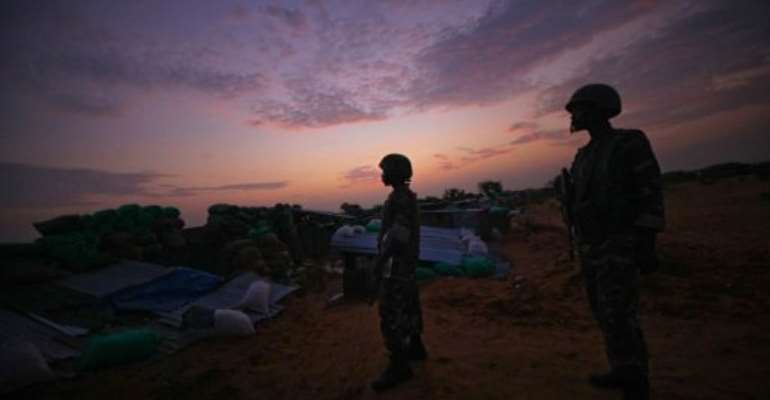 Soldiers serving with AMISOM are seen at daybreak manning frontline positions near Mogadishu in 2011. By Stuart Price (AFP/AU-UN IST/File)

MOGADISHU (AFP) - A Burundi soldier with the African Union troops was killed and another injured Monday in the north of Mogadishu, when a bomb they were defusing was detonated by Shebab rebels, a statement said.

"As the bomb was being removed to be safely defused, it was detonated by the Al Qaeda-backed extremists, the Shebab, killing one... soldier from the Burundi contingent," the AU Mission in Somalia said in a statement.

The hardline militia have resorted to suicide and bomb attacks since pulling out of fixed positions in Mogadishu in August, where the 10,000-strong AU force of Burundian, Ugandan and Djiboutian troops is battling remnant Shebab fighters.

"We will continue to fight these extremists," said AU force commander Major General Fred Mugisha. "We have the people of Somalia on our side (and) on whose information we have been able to defuse up to 70 percent planted explosives."

The Shebab, who still control large territory in southern Somalia, are also under pressure from Kenyan forces in the far south and Ethiopian troops in the west, and who recently captured a key town from the rebels.

Somalia has been plagued by a relentless conflict since the 1991 ouster of president Mohamed Siad Barre.

Last month, Somali and world leaders met in London for a conference aimed at finding solutions to the Horn of Africa country's protracted crisis that has spawned piracy, militancy and a devastating humanitarian crisis.