Nigeria bank on Odemwingie for goals 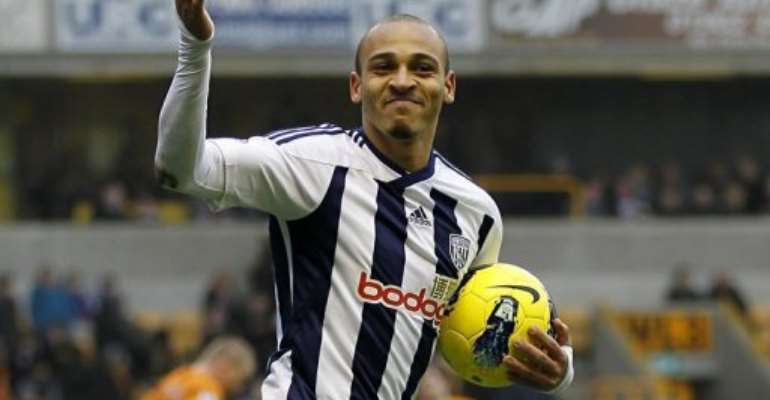 Nigeria hope Peter Odemwingie can transfer his scoring touch from the English Midlands to Rwanda. By Ian Kington (AFP/File)

JOHANNESBURG (AFP) - Nigeria hope Peter Odemwingie can transfer his scoring touch from the English Midlands to Rwanda as the 2013 Africa Cup of Nations qualifiers begin Wednesday.

The West Bromwich Albion goal poacher netted twice in the weekend demolition of Sunderland and got a hat-trick in his previous English Premier League outing against Wolves.

Odemwingie was dumped by the Super Eagles last year after a bust-up with then coach Samson Siasia, who gave way to Stephen Keshi after failing to qualify for the 2012 Cup of Nations.

Keshi has ditched the long-time policy of Nigerian coaches to choose almost exclusively foreign-based players, including 11 locals for the first round, first leg clash at the 22,000-seat Stade de Kigali.

But the spine of the team will still be foreign with goalkeeper Vincent Enyeama, defenders Joseph Yobo and Taye Taiwo, midfielder Joel Obi and Odemwingie.

There is also likely to be a first cap for Wigan Athletic midfielder Victor Moses, capped at various age-group levels by England after moving there in his early teens.

"Bear the heat because Rwanda is going to be even hotter on match day," Keshi warned his players after an early afternoon training session staged to replicate the conditions expected in central Africa.

Rwanda lack the pedigree of two-time Cup of Nations champions Nigeria, qualifying for the tournament only once, and are 18 places below the west Africans on the continental rankings.

"We do not want to be a punching bag like in the last qualifying competition when conceding five goals at home to Ivory Coast," stressed recently hired coach Milutin Sredojevic.

A successful coach of leading clubs in Ethiopia, South Africa, Sudan, Tanzania and Uganda, the Serb said Nigeria resemble a "wounded lion and those are the most dangerous animals".

Cameroon and Algeria are other countries desperate to restore pride severely dented by failure to reach the 2012 African showcase, won unexpectedly by Zambia in Libreville this month after a shootout with Ivory Coast.

The Indomitable Lions will receive match fees before the away game against minnows Guinea Bissau to avoid any chance of a strike similar to the one last November that led to a friendly against Algeria being cancelled.

Star striker and captain Samuel Eto'o is serving an eight-month ban as a consequence, a disciplinary action that led Jean Makoun and Benoit Angbwa to withdraw from the squad in protest.

The problems of French coach Denis Lavagne, who replaced Spaniard Javier Clemente after the 2012 Cup of Nations failure, do not end there with Jean-Armel Kana Biyik, Stephane Mbia and Benjamin Moukanjo injured.

Algeria rise and fall with alarming regularity and could have a tough time in Gambia, a Zimbabwe squad shorn of many regulars being probed for match-fixing visit Burundi, and Kenya host Emmanuel Adebayor-inspired Togo.

The Cup of Nations has been switched to odd-number years starting in 2013 to avoid every second tournament being played the same year as the World Cup and this has forced the organisers to condense the elimination process.

Instead of the traditional four-team mini-leagues, there will be two rounds of home-and-away ties with the 16 teams who made the 2012 Cup of Nations receiving first round byes.

They Sent 'Dante Crocodiles' To Our Area To Scarce Us — Ajum...
27 minutes ago

VIDEO: May Ken Agyapong Suffer From Paralysis And Be Numbed ...
46 minutes ago