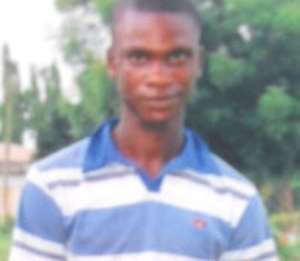 Distraught over persistent calls to end a relationship with a woman older than him, a third-year student of Bodwesango Senior High School in the Adansi North District of the Ashanti region has hanged himself.

Peter Akom aka Amakye, a General Arts student, took his life on Sunday night in his friend's room at Bodwesango.

The tragic death of the 19-year-old has left his younger sister, Joyce Akom, 16, devastated as she continuously scratches her head for answers and blames their mother, Abena Nyamaa, for Peter's death.

The boy's body, which was hanging by a sponge from a ceiling made of wood, was discovered by his friend, who screamed to attract people to the scene around 7:00 pm.

This is the first case of suicide to have hit Bodwesango Senior High School that has maintained a low profile.

Abena Nyamaa, mother of the victim, stands accused of nagging her son over his relationship with a 26-year-old divorcee, Yaa Manu, leading to his death on Sunday night.

She was said to have raced to Bodwesango from Asikaso, a village in the area, to quarrel with her son on the day in question following misinformation relayed to her.

Abena Nyamaa said she was informed that Peter Akom was getting married to Yaa Manu without her knowledge and against her wish, but the information turned out to be false.

Instead, the ceremony turned out to be Yaa Manu's apprenticeship graduation that was attended by Peter.

She admitted that she had warned her son to stay away from Yaa Manu, a hair dresser apprentice, but the boy would not listen despite his poor academic performance.

She therefore decided to embarrass the boy to stop him from seeing the divorcee, whom he was living.

But the boy, who felt embarrassed by the action that was the fourth in a series of arguments and petty quarrelling between mother and son, allegedly threatened to kill himself, and finally carried out his threat after the ceremony.

The boy was wearing boxer shorts and a singlet when his body, which has been deposited at the Bekwai Government Hospital morgue, was discovered, Chief Inspector Mensah stated.

Lover of the deceased, Yaa Manu, told news men that Peter took the extreme step because he was fed up with his mother's nagging.

According to her, she and Peter had been in relationship for two years, but did not enjoy the blessing of Peter's mother.