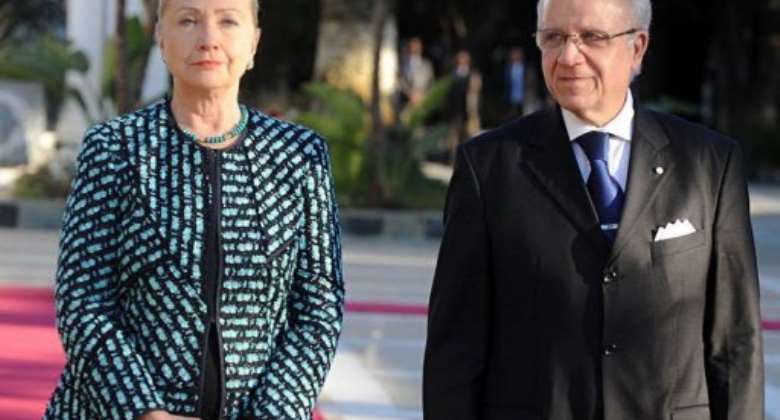 ALGIERS (AFP) - US Secretary of State Hillary Clinton pledged US backing for democratic and economic development in north Africa Saturday as she toured the region that gave birth to the Arab spring.

Clinton flew into Algeria Saturday from neighbouring Tunisia, where she attended the "Friends of Syria" international gathering a day earlier. Later Saturday, she was due to fly on to the Moroccan capital, Rabat.

Algerian Foreign Minister Mourad Medelci, who visited Washington last May, was at the airport to meet Clinton. The two were to discuss political reform, security issues and counter-terrorism in the region, said Algeria's foreign ministry.

She also met President Abdelaziz Bouteflika and the two were due to dine together before her departure for Rabat. They would discuss Algeria's approaching parliamentary elections in May, her office said.

At a speech in the US embassy in Algiers, she said the people of north Africa's Maghreb region should determine their own future.

"I come from Tunisia, tomorrow I will be in Morocco. My message is the same: the people of the Maghreb are as talented, creative and hard working as people anywhere in the world," she said.

"They need and deserve to make decisions on behalf of themselves because that is good for the dignity and rights of every individual and it's good for every society."

The United States wanted to be Algeria's partner on the road to economic and democratic development, Clinton said.

Fifty years on from independence she said, "Algeria needs to assume its rightful place as a nation among nations where prosperity, peace and security are available for the people.

"And the United States wants to be your partner -- a partner of your government, of your economy and of your civil society -- to see these kinds of positive changes occur."

Earlier Saturday in Tunisia, Clinton pledged that Washington would help the country rebuild its economy and cement democracy, as the cradle of the Arab Spring struggles to get to trips with the aftermath of the uprising.

"I come with a very specific and committed statement of support about the political and economic reforms that are occurring here," Clinton said after talks with Tunisian President Moncef Marzouki.

"The political side of the revolution is going quite well," she said.

"I am a very strong champion for Tunisian democracy and what has been accomplished here.... The challenge is how to ensure the economic development of Tunisia matches the political development."

Washington is keen to support Tunisia's democratic progress and economic success, hoping it will set an example for other countries in the region that have toppled autocratic rulers or are undergoing popular uprisings.

But the authorities in Tunisia, where a moderate Islamist government was voted into power in October, are struggling to deal with unemployment levels of nearly 20 percent and continuing political tensions following the revolution.

Later Saturday, Clinton was due to fly on to the Moroccan capital Rabat for talks with Prime Minister Abdelilah Benkirane.