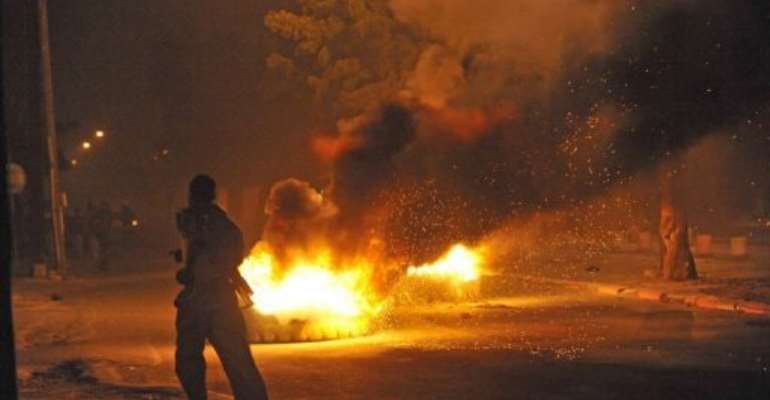 The Constitutional Council upheld its Friday decision to allow the 85-year-old Wade to run in the February 26 election, a ruling that sparked deadly weekend riots in one of Africa's most stable nations.

The council's five "wise men" said early Monday that appeals against their initial ruling were "unfounded".

The opposition, united under the June 23 Movement (M23), is expected to announce Monday plans for a fresh protest after calling for mass resistance to force Wade to back out of the election.

L'Observateur evoked a humiliating day for Senegal which saw the country also losing a third match in the African Cup of Nations in the city of Bata in Equatorial Guinea.

"The zeros of the Constitutional Council, the zeros of Bata," it declared.

The opposition argues that the constitution allows a president to serve only two consecutive terms, but Wade says the law, which was amended in 2008, does not apply retroactively and cannot take into account his previous two terms.

Wade, who first took office in 2000, has dismissed the opposition protests as "temper tantrums".

Senegal's international music icon Youssou Ndour, whose own plans to stand were rejected by the council, branded its ruling on Wade as "shameful" and the last step in a "constitutional coup d'etat".

"Senegal is ashamed. Senegal is bruised," said the singer.

"We have been betrayed by this shameful decision" said Ndour, urging African nations and the international community to protest.

M23 leader Amath Dansokho, speaking to private radio station RFM, described the council, which was appointed by Wade himself, as a "corrupted" body.

The opposition had warned Sunday that "the time for talking is over".

"This is an appeal, a solemn, strong and resolute appeal to engage in resistance. We are ready for all sacrifices," said Amadou Gueye, one of the movement's leaders.

Another anti-Wade movement formed by a group of rappers and calling itself "Y'en a Marre" (We're Fed Up), has also called for nationwide mobilisation.

Senegal, often hailed for its vibrant democracy, was rocked by riots on Friday night when a rally erupted in anger at the council ruling.

A policeman was killed when youths engaged in running battles with police, torched cars and shops, erected barricades and burned tyres on Dakar's main roads.

Sall blamed the president for the violence and urged people to "make every effort to ensure that Wade retracts his candidacy".

When Wade was elected in 2000 for a seven-year mandate, there was no limit on the number of presidential terms. He was re-elected in 2007 after introducing a two-term limit and reducing the mandate to five years.

But Wade again revised the constitution the following year, reverting to a seven-year mandate, renewable once.

On Sunday, UN Secretary General Ban Ki-moon, speaking at an African Union summit in Ethiopia, called on the continent's leaders to respect democracy, although he did not specifically mention Senegal.

The Arab Spring revolutions that swept north Africa last year were "a reminder that leaders must listen to their people", he said.

"Events proved that repression is a dead end. Police power is no match to people power seeking dignity and justice."