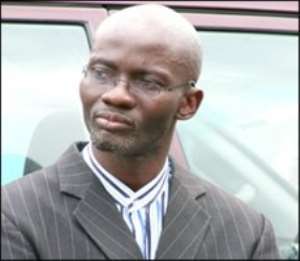 The Executive Director of the Danquah Institute is alleging that the people who arranged the $3 billion Chinese loan agreement will be $30 million richer if the new agreement is approved by Parliament.

Gabby Asare Otchere Darko told Joy News the amended agreement is not fundamentally different from what was withdrawn.

The only difference perhaps is that the people who arranged for the loan are guaranteed $30 million once the loan is approved.

“Why is this so called Master Facility Agreement before Parliament because it doesn't automatically lead to the project being funded? It doesn't. All it does, actually, is that immediately after it is approved by Parliament, some people who arranged it will have access to $30 million and a commitment fee of $3.5 million will be paid within 20 days and another 3.5 before the first subsidiary agreement will be approved and the funding released,” he alleged.

The Majority in Parliament Thursday morning announced the withdrawal of the controversial loan agreement in Parliament, only to lay an amended version few hours later.

The amended version has been referred to the Finance and Poverty Reduction Committee for scrutiny before it will be brought before the House for debate.

The Finance Minister said the amended agreement has incorporated the concerns and legitimate questions by the opposition.

But the Danquah Institute is not the least impressed. Gabby Otchere Darko mocked at the improved amended $3 billion Chinese loan, describing it as a “lipstick” and a “make-up” applied to a wrinkled face.

Even though he conceded that there have been few additions, he was convinced the new agreement is substantially the same as the old.

According to him, no where is it guaranteed in the agreement that Ghana is entitled to the first tranche of $1.5 billion once the agreement is approved by Parliament.

“They are approving a Master Facility Agreement which doesn't automatically lead to any funds being released from China or from the CDB [Chinese Development Bank]. Nothing,” he said

“…The document itself is very explicit that it is after it has been approved that they will sit down with the Chinese and the Chinese will do their feasibility studies, look at it item by item,” before the money will be paid to the Ghana government, he added.

He said the payment of the first tranche of the loan will be contingent on the availability of a commensurate amount of Ghana's oil before it will be paid.

But the Deputy Finance Minister Seth Terkper told Joy News' Sammy Darko the agreement, in its new form is favourable to the people of Ghana.

He maintained however that the amount is “still $3 billion; it is still two tranches, 1.5 billion each and the terms haven't changed.”

He said government has listened to the criticisms by the opposition and has made the necessary changes.

Seth Terkper said given the needed infrastructural development that was lacking, President John Mills was not going to negotiate an amount less than the $3 billion proposed by the Chinese Prime Minster.