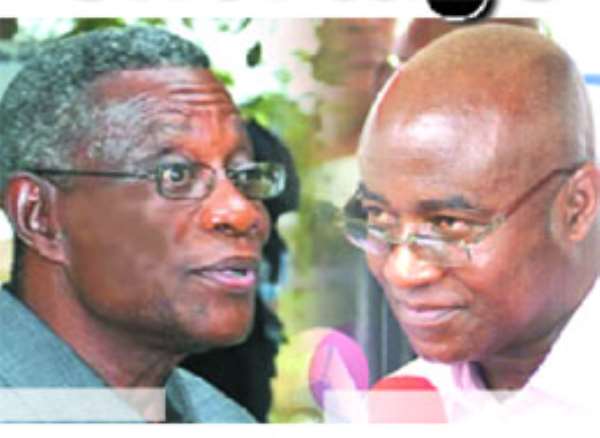 The Minority in Parliament has attributed the acute shortage of Liquefied Petroleum Gas (LPG) to government's disruption of Tema Oil Refinery's (TOR) operations, and also failing to pay under recoveries to the Bulk Distribution Companies (BDC's) regularly.

According to them, the Ghana National Petroleum Corporation (GNPC) has also usurped the role of TOR in the lifting of crude oil, which has significantly reduced the domestic supply of the commodity, leaving a gap that has not been filled by the BDCs.

Addressing the media in Parliament yesterday, the Minority spokesperson for Energy, Hon. Kofi Adda, said the failure to pay under recoveries regularly has made most of the BDCs to withdraw their services from the importation of LPG, as it is no more attractive to them.

'As we speak, there is only one company by name 'Fuel Trade', which has remained as the only BDC engaged in the LPG importation'.

He contended that the government has deliberately refused to tell Ghanaians the truth about the LPG shortage, and is instead hiding behind cleverly selected statistics, conveniently packaged to put blame on the users of commercial vehicles, particularly taxi drivers.

The Spokesperson mentioned that the over emphasis by the NDC officials to the seeming neglect of the supply side is not only unfortunate but unpardonable, because those officials know the real facts, but consciously avoided giving the true picture of the decline to the nation.

'The deliberate avoidance of a serious analysis of the decline in domestic production is a matter that should not only attract the attention of Ghanaians, but it is indeed an issue to which we should demand answers from the government'.

To Kofi Adda, it is untenable, false and unacceptable for government to create the impression that heavy burden of subsidies, the increase in the population, growth of the consumption of LPG and limited storage capacity are the major cause of the shortage.

According to the minority, the NDC government had no moral right to cite the factors they have espoused as the major cause of the LPG shortage, which is a mere excuse by an administration that is constantly proving to Ghanaians that it is incapable of managing this nation's affairs.

'Former President Kufuor and the NPP administration lived through these same constraints, yet we never experienced such an acute and prolonged shortage as we are confronted with now,' he said.

He said that taxi drivers are not to blame for the shortage of LPG in the country, and that they are only being used as 'escape goats' for the failure of the NDC government to manage the LPG needs of the country.

TOR's contribution of LPG, which used to account for about 59.9% of total consumption stood at a mere 4.8% by the end of the first year of Prof. Mills administration, clearly showing that TOR's inability to produce has a major part to play in the LPG shortage.

The minority is, therefore, calling on the President to direct GNPC to leave TOR alone, to operate  freely because even with the measures being put in place by government, if there is no domestic production and the BDCs are not being paid their under recoveries, the problem will still be with us.