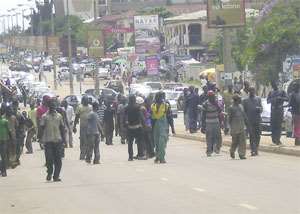 THE SERENE city of Sunyani in the Brong Ahafo region was yesterday thrown into a state of anarchy when hundreds of mechanics from Sunyani Magazine had a showdown with the police following the arrest of their colleagues.

Several armed police personnel threw tear gas and robber bullets on the Magazine boys who attempted to forcibly go to the Sunyani Municipal Police Station to free their colleagues who were under detention.

The situation created a pandemonium in the city as residents started running helter-skelter to safety to avoid being hit by stray bullets.

There were unconfirmed reports of some casualties at the time of filing this report, involving a middle-aged woman and a young boy who were said to have suffered some injuries as a result of the tear gas.

Later, the irate mechanics, who were overpowered by the police, gathered at the Magazine area, near the Sunyani Polytechnic and blocked the main Sunyani-Kumasi Highway, resulting in a heavy traffic jam.

The police pursued them to the polytechnic area and started shooting in their attempt to disperse the mechanics who started throwing stones at them. The presence of the police in the area also brought a sigh of relief to motorists who could not move following the roadblock. The police cleared the road to ensure the free flow of traffic.

When DAILY GUIDE spoke to some of the Magazine boys, they explained that they lost one of their masters called Kwasi Yeboah, who was being buried yesterday.

According to them, as part of their tradition and custom, they had to 'display' in town to bid a proper farewell to their departed colleague. They used locally-manufactured machine guns with powdered substances and shot several times as they move round the city.

This however created tension in the municipality because they drove recklessly in the city amidst firing of musketeers.

According to the mechanics, when they were finally heading towards the cemetery for the burial, the police pounced on them and ordered them to stop shooting, but they resisted.

This created a brawl between them and the police, with a police officer slapping one of them. They said when their colleague also retaliated with a slap, the police quickly arrested him and started throwing tear gas and rubber bullets at them.

The mechanics said some of their leaders who went to the police to enquire about the incident were also arrested.

Residents who spoke with this paper also expressed concern about the manner in which the police embarked on the operation. They said the police applied too much force in dealing with the mechanics, leading to the skirmishes.

However, a police officer who pleaded anonymity said the police only wanted to bring the Magazine boys to order for the sake of public safety because they went out of control.

He said the media would know their official position after the REGSEC meeting which was ongoing as at press time.