Accra to be Cultural Capital soon 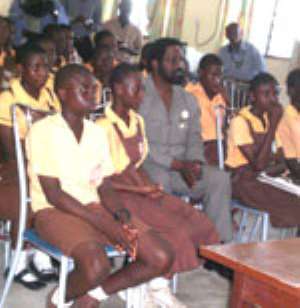 The Greater Accra Region has been selected among the 11 winning projects in West Africa to receive a grant of 55,00 euros for cultural programmes by the United Cities and Local Government (UCLG) in Spain.

The grant was applied for on behalf of the city by the Accra Culture and Art Network (AccraCAN), and was presented to the Mayor of Accra, Mr. Alfred Vanderpuije, by Madam Olga Cabarga Gomez, the Spanish Ambassador, at a symbolic ceremony at the Usher Fort in Ga Mashie.

AccraCAN's aim is to infuse into the capital's neighbourhoods, arts and cultural activities that improve exposure to the understanding of and respect for diverse cultural heritages, and to support arts activities that engage the community.

According to the Madam Diana Hopson, President of MUSIGA and a member of AccraCAN, the objective of the AccraCAN is to gather data on Accra's cultural assets and human resources, in order to generate strategies to turn it into a cultural capital in West Africa.

'AccraCAN is committed to raising the international profile of Accra; attracting visitors through cultural activities and art events; expanding local audiences for cultural activities, and developing the careers and talents of art professionals in the city,' she added.

She added that creative writers would put their work together as an anthology, as well as organise creative writer's competitions, through creative artistic centers with educative programmes to handle socio-cultural and environmental issues.

The Spanish Ambassador, Madam Olga Cabarga Gomez, also added that the grant was the first worldwide document establishing an undertaking by cities and local governments for the cultural development of the UCLG.

She said UCLG created a fund for local cultural governance last year, which has been promoted by the Committee on Culture, the World Secretariat of UCLG, and the City of Barcelona, and obtained the support of the Spanish Development Cooperation Agency.

She explained the call for a proposal in 2010 was set at 675.000 euros, and open to projects led by cities and local governments.

She said the project was based on the Agenda 21 for Culture, UCLG's reference document for local cultural policies.

Madam Olga Cabarga Gomez said the grant was expected to be used to fulfill a number of mandates, including developing programmes and tools to help turn Accra into a Cultural Capital.

On the other hand, the Mayor of Accra has pledged his commitment of the Accra Metropolitan Assembly (AMA) to bring to fruition, the endeavour to turn the city into a Creative City and Culture Capital.

He said the vision of the AccraCAN's City of Culture coincides with the Millennium Project, by beginning with a pilot program in Ga Mashie to identify and list structures for preservation and rehabilitation.

According to him, it was entirely appropriate to launch the effort to transform Accra from a building that had witnessed over 3,000 years of the city's history.